FLASHBACK
MARCH 1981
Wynnum-Manly five eighth, Brian Walsh created something of a record when he was sent for two spells in the sin bin in one quarter of football at Kougari Oval.
The Murwillumbah Brothers’ product was marched the first time for a professional foul, and soon after he returned to the field, he was involved in an all-in-brawl, which saw him sent back to the sheds, alongside Wests’ winger, Bob Taylor.
The referee was Jim Ward, brother of Test referee, Eddie Ward.
Wynnum defeated Wests 17-13, to scrape into the semi-finals of Brisbane’s Woolies Pre-Season Competition, which featured four quarter football and an experiment with the unlimited tackled rule, which had been scrubbed at the end of the 1966 season.
State forward, Greg Dowling was in devastating attacking form for Wynnum, while halfback, Terry Saunders took the spotlight in the backs.
Exciting new Wests’ fullback, Tony Currie had another outstanding game, scoring two tries. Ray Baumber and Steve McCosker were the best of the Panthers’ forwards.
Souths’ pack had it all over Brothers’ set in a match at Corbett Park, although the Magpies only won 13-8 against the home side. Giant centre, Mal Meninga caused Brothers all sorts of problems, playing a big role in tries scored by Chris Kealey and Brad Sully.
Fullback Tony Gibson and winger, John Weier scored Brothers’ tries, both coming in the second half.
Souths announced a new sponsor – the Chevron Paradise Hotel, at Surfers Paradise.
Former Manly-Warringah winger/centre, Mick Waller scored three tries for Redcliffe in their 27-12 win over Easts at Lang Park, a match in which Redcliffe captain-coach, Arthur Beetson was sent to the sin bin after an incident in which he felled the Tigers’ young forward, Cavill Heugh.
Halfback, Colin Part was Redcliffe’s star, despite playing only the first half. He was the engineer of three of the first four tries, which saw Redcliffe race to a 16-0 lead.
Part’s performance showed that international halfback, Greg Oliphant, who played the second 40 minutes, faced a tough battle to secure a permanent first grade spot.
In the early match of the Lang Park double header, Valleys coasted into the semi-finals with a 33-12 thrashing of premiers, Norths with centre, Vic Wieland scoring two tries.
Missing from Norths’ 1980 side were the likes of Kiwi superstar, Mark Graham; Nev Draper, Shane Bernardin and Gary Walker, who had left for other clubs, while centre, Peter Dutton was unavailable because of his baseball commitments. 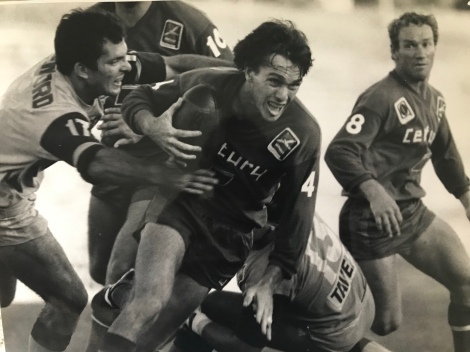 2 Queensland Country prop, Greg Dowling unloads to hooker, Jeff Ashe in a match against Brisbane at Lang Park in 1980.