WEEK 43 2020
MONDAY, OCTOBER 26
Melbourne Storm return to their Sunshine Coast base to celebrate their NRL Grand final win, and there is a report skipper, Cameron Smith flew back wearing his footy gear. Well, some people reckon he plays in a dinner suit. I remember, after Storm’s win over Canterbury, in the 2012 Grand Final, my last as The Courier-Mail’s chief league writer, that Cameron was the last player to get dressed. He just wanted to soak up the atmosphere, and enjoy the moment.
Matt Wood, who played for Canberra in the 1989 and 1991 grand finals, is having a punt at Stafford Tavern, as I join friends for a couple of ales.
TUESDAY, OCTOBER 27
One of the rugby league tours, lost in the mists of time, is the ground breaking Queensland Residents’ trip to South Africa in 1994, with the Maroons beating Natal 60-6, Transvaal 76-5 and South Africa 34-0. A member of that team was Peter Tong, who played for Wests in Brisbane and also was contracted by the South Queensland Crushers in the ARL Optus Cup competition. I am reminded of this by Jessy Yip, a relation of Peter’s, after I mentioned Peter’s younger brother, Aldwin in one of my diary entries. Aldwin worked at Queensland Newspapers at the same time as me, and also played first grade for Wests. Other members of that touring team to South Africa included Steele Retchless, David Maiden, Travis Norton and Brad Tassell. The captain was Craig Grauf and the coach, Murray Hurst.
WEDNESDAY, OCTOBER 28
Our eldest son, Damien turns 40 today. How can that be! Birthday banners greets him, as he arrives at East Ayr Primary, where he is deputy principal.
My wife, Marie is almost cleaned up by a female driver at Grange ‘Fiveways’, as she walks across the pedestrian crossing. The driver was on her phone. A bloke walks down the centre path, dividing our estate, with a long wooden beam in one hand, hitting it against trees. And it’s not even a windy day.
Learn of the passing former Newtown winger, Ray Blacklock, aged 65. Blacklock and John ‘Chicka’ Ferguson were the wingers in the Jets’ 20-11 loss to Parramatta in in the 1981 Sydney Grand Final.
Former Broncos’ media man, and legendary South Tweed Heads forward, Trad McLean tells me his former front row partner, Marty Quinn is 15 kg lighter than in his playing days.
THURSDAY, OCTOBER 29
NRL can the National Anthem for State of Origin, then perform a backflip, as a result of public outrage. One of my indigenous friends applauds the decision to reinstate the anthem.  “They (NRL) panicked because a couple of indigenous guys have chips on their shoulders,” he says.
Extinction Rebellion dump manure in Brisbane. I think it was just their manifesto, that they dropped from a truck.
FRIDAY, OCTOBER 30
Watch the Hull derby, between FC and KR, playing for the Clive Sullivan Trophy. Hull FC win 31-16.
Some people reminisce about family trips to the beach or the mountains, when they were children. Radio TAB’s Gerard Daffy reminisces about going to Beenleigh Dogs, on a family holiday from Victoria.
Noted author, Hugh Lunn is not able to attend the annual Ross Livermore Memorial Lecture on November 14. He is still self-isolating, the result of a lung infection he picked up when working as a foreign correspondent in Indonesia. Hugh delivered a previous lecture, titled ‘The Origin of the Origin’. Another famous author, Adrian McGregor, who delivered the 2015 lecture, about the 1990 Kangaroo tour, bags the ABC for its AFL bias.
SATURDAY, OCTOBER 31
New Zealand company, Autex, is a major sponsor of Huddersfield Rugby League.
A female sings the national anthem under the bridge on the path which divides our Hermitage Gardens Estate. No doubt, it was her own little protest at the NRL’s cowardly decision to (initially) drop the anthem from Origin. The Wallabies sing the anthem with passion, ahead of their Bledisloe Cup match against the All Blacks in Sydney. It’s a shame they can’t play football, as well as they sing, with the All Blacks winning 43-5. I often watch the anthems before union Tests, and then switch channels, because the best part is over.
Marie and I exit Wilston Village Bar as All Blacks’ supporters arrive. The streets are full of kids celebrating Halloween. I wish they would celebrate Wattle Day with the same enthusiasm. Wattle Day! What’s that?
Labor is returned to power in Queensland, no doubt on the back of keeping us all safe during the Covid crises. Former SKYSports rugby league caller, Jason ‘Costo’ Costigan (North Queensland First) loses his Whitsundays Seat to his former party, the LNP.
SUNDAY, NOVEMBER 1
Wake to the news, Sean Connery, the best James Bond, has died, aged 90.
“The Wallabies may be worse than we thought,” writes Chris Rattue in the New Zealand Herald.
Steve Haddan, author of ‘Our Game’, the History of Brisbane Rugby League, attends the Brisbane Rugby Union Grand Final between Easts and University at Ballymore, with Easts winning on the back of their superior scrum. Evidently, it was a game for the purists.
An angle grinder is needed at North Queensland’s Alva Beach SLSC, to unlock the beer fridge, as the designated person forgot the key. Where there’s a will, there is a way. 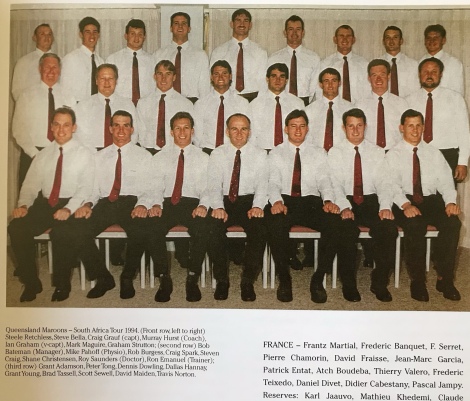 1 The Queensland Residents Team which toured South Africa in 1994 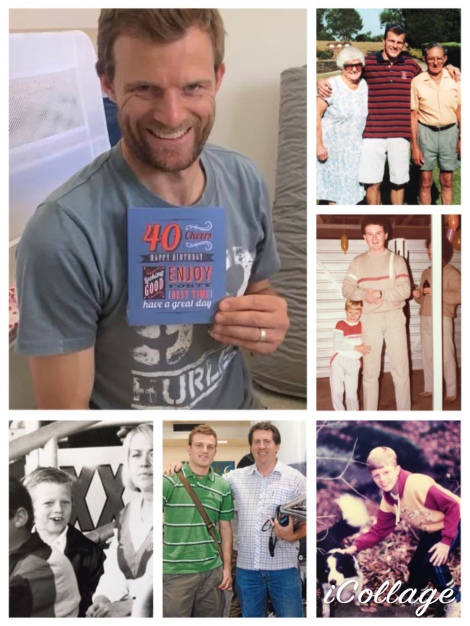 2 Collage of Damien, through the ages