Mario Romeo Rigo, former personal chef to Australian Prime Minister, Harold Holt, dies at the age of 70. My wife and I dined at ‘Romeo’s’ in Brisbane a number of times, and Romeo was an entertaining host. He would choose the wine for us, and always remembered our names, even though we weren’t celebrities. Remember, he had the likes of The Rolling Stones dine at his place.

Former ‘Rugby League Week’ editor, Tony Durkin tells me former Test prop, Dud Beattie has passed away on the Sunshine Coast, aged 81. I file news items for ‘The Courier-Mail’ and the QRL website. Phone Allan Langer for a comment, given Dud, as a state selector, had pushed hard for him as Queensland halfback in 1987, when many felt he was too small. I interviewed Dud a number of times for the inside word on the selection of state and national sides.

On Radio TAB, noted journalist Leo Schlink calls rugby union ‘the most brutal game in the world’. There would be many who beg to differ.

Doris Roberts, who played the interfering mother in ‘Everybody Loves Raymond’, dies aged 91. I love that show.

Today I am ‘Linked-in’ with Clive Cadman, fleet manager of North Star Motor Group. England born, Clive and I played league together at Brisbane Brothers, and he was on the same flight as Marie and I when we travelled to England for the first time in October, 1977. He saved my bacon when he found my wallet on the floor of the aircraft.

To Birkdale in Redlands Shire to interview former Queensland Rugby League utility back, Gary Dobrich for Men of League magazine. Gary was one of my heroes growing up. He was a brilliant halfback for Murwillumbah Brothers in the 1960s, before moving to Brisbane to make a name for himself. Later he returned to Murwillumbah to coach Brothers, and he and Stan Damro ran a noted sports store at Tweed Heads. Kevin ‘Swampy’ Johnson had stayed overnight at the residence of Gary and Sue Dobrich, and the four of us chat for three hours about footy and Murwillumbah (‘Swampy’ was a handy utility back for Brothers).

My wife, meanwhile, attends a morning tea at our town house complex, with $180 raised for breast cancer research.

Hear from a reliable source that a southside (Brisbane) schoolboy footballer, with all the talent in the world, is causing huge dramas, on and off the field. In the latest incident he was disrespectful to a female referee.

Our favored seafood outlet in Fortitude Valley has closed and moved to Darra. Queensland is famous for seafood, but trying to find decent, well priced outlets in Brisbane is difficult. To Broncos v South Sydney match with Brisbane staying on top of the premiership ladder, courtesy of a 30-8 win, with Corey Parker the star. David Middleton invites me to be part of a panel choosing the all time great rugby league skipper. Townsville University rugby league stalwart, Adrian Hepi wears his (military) service medals to the game, ahead of Anzac Day. Our female Brisbane City Council bus driver runs over a witches hat and then stops at every stop on the way home, even though no-one presses the buzzer.

To Gibson Park, Stafford for Brothers v Dayboro Second Division rugby league match. A fire truck has pulled up and the firefighters are enjoying the action. Dayboro win easily.

Learn of the death of former North Queensland and Leigh (England) forward, Wally Tallis Snr., the father of former Australian rugby league skipper, Gorden Tallis. Also learn of the passing of Bishop Satterthwaite, who was based at Lismore from 1971 to 2001.

Watch replay of the marvellous 1975 Brisbane Rugby League grand final between Wests and Redcliffe at Lang Park. As the teams run out, I notice my former Telegraph work colleague, photographer, Keith Morris on the sideline. A greater character. A no nonsense Aussie, in the Michael Caton mould.

Former Crushers Leagues Club caterer, ‘Rabi’ has a pie shop at Stafford Shopping Centre, but also sells curries, the recipes from his native Afghanistan. ‘Rabi’ enjoyed the odd beer at the club, and said there would not be any trouble in Afghanistan if there was a pub and a TAB on every street corner. 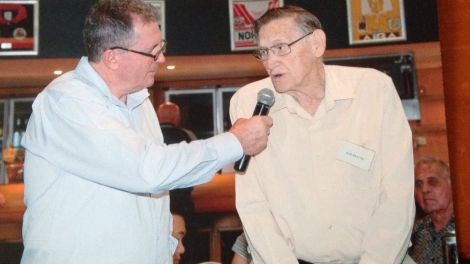