ANOTHER day of exploring the delights of Carnarvon National Park, including Baloon Cave, Mickey Creek and Warrumbah Gorge, the latter the highlight. Dr Philip Crisp and his wife picnic near the entrance to the gorge. They are in the risk assessment business for science teaching, and he is going to a conference on Russell Island in Moreton Bay. He gives me his business card to pass on to our eldest boy, Damien, who is a teacher at Beenleigh High.

Today we walk up Boolimba Bluff and it is not as hard as we were led to believe. This is followed by drinks at the Wilderness Lodge, with Paul and Kerri from Barham on the River Murray. They are keen lawn bowlers. Their son, a policeman, based at Hendra in Brisbane, is a good golfer. Paul previously had a corner store at Kedron in Brisbane, and played Aussie rules for Wilston Grange. Paul coached prominent journalist, Dan Koch at Wilston. I also chat to Steve Beetson, a nephew of former Australian rugby league skipper, Arthur Beetson. It’s a small world. I interviewed Artie many times, and wrote his obituary for The Courier-Mail. Steve lives at Grafton in northern NSW. He was a spectator at THAT grand final in Lismore a few years back when Marist Brothers beat South Grafton, after the Grafton side led by 30 at halftime. Our son, Damien attended the match. South Grafton now play in the Group 2 (Coffs Harbour) competition, which Steve says is easier than Northern Rivers. Fireside chat with several Tasmanians, who are pro the timber industry. One bloke is a whisky distiller.

Say goodbye to our cabin and the ‘feral’ kookaburra which has been stalking us. Coffee stop at Injune. Rude staff at cafe. Not all country people are friendly. Back to Roma, where have barramundi (ordinary) at Commonwealth Hotel. Former Mitre 10 people from Brisbane ‘upgraded’ the pub. Watch Burleigh v Wynnum Queensland Cup match in our motel room. Burleigh utility star, Jamie Dowling arrives ‘late’ for team photo, holding a child. One regret from this trip, is the fact I didn’t stop in for a beer at a ‘real’ bush pub. I remember how much my great friend, the late Ray Fletcher, loved those country pub stops when he covered Great Britain rugby league tours for the Yorkshire Post.

French Rugby League hold a conference in Montpellier, where I stayed when covering Queensland Residents 1989 tour of France. Former Carcassonne league coach, Laurent Garnier is working with the Kenyan Sevens rugby union side, as well as the Toulouse union side. (defence).

There is a lovely tribute, ahead Super League matches in England, for Ronan Costello, who was killed playing league for Huddersfield. He was only 17.

Learn of the death of Ann Gregor, widow of former Murwillumbah 2MW Radio announcer, Bruce Gregor. She was an excellent singer.

Marie and I join a tour of the Roma Cattle Sale Yards, the largest in Australia. Over 900 head went through today (a fat sale), and that is considered a low volume. I chat to one of the three guides – James Sendon – who drives a local mini-train, for the kids, at weekends. It is hard getting volunteers, he says. That is true, everywhere. We have cooked breakfast at the cattle yards canteen.

Drive to Kingaroy, via Condamine, Chinchilla and Jandowae. For the next three nights we will be staying in the Avocado Grove Cottage on the Bethany Estate, owned by the Bjelke-Petersen family. Rib fillet for dinner, bought at Queensland Country Meats, Roma.

Learn of the death of former Sydney Telegraph and Channel 9 league and surf journalist, Steve Gee. A heart attack at 45.

Nick Braban, a close friend of our youngest lad, Lliam, is on Channel 9 giving his views on the State Government’s lock-out laws. Nick is a spokesperson for Fortitude Valley licensed venues.

Fog envelops Kingaroy. We drive into town where Marie buys produce at the famous Peanut Van. I buy newspapers at ‘weird’ newsagency, where the papers are almost hidden, way up the back. The first time I came to Kingaroy was 1972, to visit my uncle, Bill Ricketts who was a policeman in the town. In 1986 I covered the Wide Bay v New Zealand match at Kingaroy – for the ‘Telegraph’. Finished up at a pub with members of Chris Close’s family.

Lunch today at Moffatdale Ridge Winery, after driving through Wondai and Murgon. Major renovations are taking place at Royal Hotel, Murgon, which is owned by former Valleys’ prop, Frank Clancy. I slept on the verendah back around 30 years ago when I went to Murgon to interview licensee, Mick Retchless, the former Queensland and Valleys’ centre. Susan Kinsella takes us through the tasting at Moffatdale. Spinach ravioli (me) and pumpkin soup (Marie) for lunch. Tonight we get a courtesy bus to Kingaroy RSL. Our driver is Gary Tessmann, a relative of former Australian forward, Brad Tessmann.

This morning we met John Bjelke-Petersen as he headed to the funeral of the wife of the manager ‘The South Burnett Times’. I interviewed his dad, former Premier, Joh, a number of times, as a young reporter at the ‘Telegraph’, sometimes telephoning him when he was at home at Bethany, usually around 7 a.m. It was a bit hard to decipher what he said at times, given his command of the English language, was, well, different.

To Bunya Mountains in wet, windy weather. Get assistance from camp ground manager, Wayne Kratzmann when we have trouble with the fireplace in our cabin. Wayne was South Burnett Mayor, and worked as a radio announcer for 16 years. On the walls of the restaurant/cafe there is a photograph of The Beatles on Plymouth Hoe, in England.

An ice hockey player is interviewed on Foxsports, and everyone jokes about the brawls in the game. What is the difference between brawling in ice hockey and rugby league? In the latter sport, the players are condemned by the media, for throwing punches. In ice hockey, it seems to be OK, going on the flippant approach of the Fox reporters. 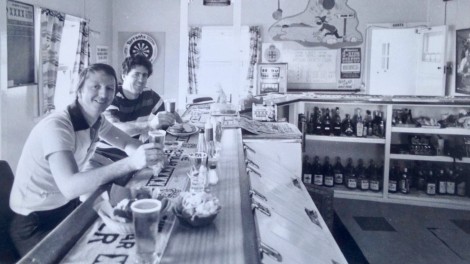