Walk Bunya Mountains National Park – Festoon Falls, Barker Creek, Paradise Falls. Surprising number of walkers, given the crook weather. Only one tree down. Thought there would be more. I count 48 wallabies back at the main picnic area. Home made pies for lunch. Chicken Kiev at restaurant tonight. There is a Carl Rackemann jumper on the wall. Carl, who played 12 cricket Tests for Australia, hails from Wondai.

Back to Brisbane, via Oakey. Covered one rugby league match there, back in the 1980s. Brisbane Norths played the local Bears outfit, coached by the legendary, Peter Connell. I remember a Norths player being sin binned and having to walk through the can bar, where he copped heaps of verbal abuse, and maybe a can or two.

Attend Former Origin Greats (FOGS) lunch at Suncorp Stadium. At my table – fellow journalists, Bernie Pramberg and Paul Malone; former Test fullbacks, Robbie O’Davis and Colin Scott. Bernie, who has a cottage in the countryside in the Granite Belt area, says there is no rugby league team in Stanthorpe this year. How can that be? Brad Backer, Mike McLean, Gary Belcher, Kevin Campion, Greg Conescu, Michael Crocker, Mal Meninga, Trevor Gillmeister, Wally Fullerton-Smith, Ashley Harrison, Mark Hohn, Allan Langer, Bad Tessmann and Kevin Walters are among the Origin stars I chat to. Ash Harrison is so thin, but he is not crook. He is into triathlons. Evidently dual rugby international, Mat Rogers is resonsible.

To the Caxton Pub afterwards, where I catch up with former Queensland prop, Ben Ross and his dad, as well as Greg Reynolds, who coached Queensland Residents in 1989, on their tour of France. I covered that tour and Greg did a good job, as the Maroons won all four matches against regional selections. My cabbie home is mad. He is suing the Finnish Government over something or other.

Pizza (from kookaburra Cafe) at our youngest son, Lliam’s place, ahead of the return Origin match at Suncorp Stadium. Winger, Dane Gagai scores three tries as Queensland wrap up the series with a 26-16 win over New South Wales. Qld forward, Sam Thaiday is put on report for as dangerous throw. Broncos’ media man, Trad McLean takes a French mate to the game. I copped one toppled beer from a spectator behind me. What would be an Origin match be without that happening.

Learn of the death today of former Queensland and Australian hooker, Brian Fitzsimmons, 74. Fitzsimmons was a brilliant striker for the ball, and was always targeted by the New South Wales forwards, with poor old ‘Fitzy’ often left on the floor after being smashed in a scrum.

New Queensland Rugby League Central premises is officially opened today. I chat to Australian Rugby League Commission director, Chris Sarra, a brother of Zac Sarra, a former star forward with Easts in Brisbane. Zac is now a magistrate. Yvonne Sampson (Channel 9) says she would like to interview me, re the prospect of a rugby league museum in Brisbane. I write Brian Fitzsimmons ‘obituaries’ for The Courier-Mail and the QRL.

Sad day. Learn of the passing of my former Murwillumbah Brothers’ teammate, Kerry Twohill, a prop forward who played well above his weight. One of the funniest blokes I have met, a man who retaind his good humor despite some major health battles. For a time, he was out garbo in Brisbane, when we lived at Lutwyche. That was back in the day when the garbos ran into your yard and carried the bin to the truck, before returning it. Former Australian and Cronulla skipper, Greg Pierce also has passed away. My wife always regarded him as a ‘good sort’ in the Robert Redford mould.

Today, the Brits vote to go it alone – Brexit. I’m not saying that is sad. I don’t have a firm view.

Valleys beat previously undefeated Ipswich in a Brisbane Rugby League match at Emerson Park, Grange. One of Valleys’ best is Andy Lancaster, who hails from my home town, Murwillumbah. Go Andy. Valleys’ legend, Marty Scanlan talks to the troops after the famous victory. The current group sing the Valleys’ song, and Marty is emotional. The player of the match has to scull a tankard of (XXXX Gold) beer. Please, don’t be outraged.

Minus three in Kingaroy today! Valleys are featured on Maroon Zone on Channel 9. On the same show, Australian skipper, Cameron Smith says Queensland Origin work horse, Gary Larson, from Miriam Vale, was his favorite player as a kid. Both men are 80 minute players.

A Kiwi, Brett Wilson contacts me wanting video footage of 1972 World Cup match, Australia v New Zealand in Paris. Can anyone help? I remember watching the game, and, for some reason, the effort of Australian forward, Gary Sullivan (Newtown) stands out. He ended up doing time for armed robbery and I don’t think he attends Kangaroo reunions. 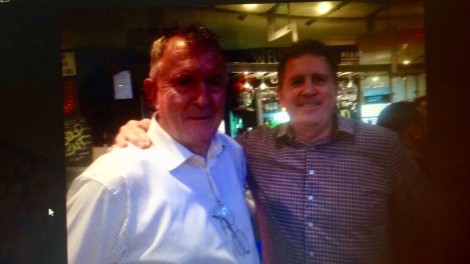