DIARY OF A RETIRED RUGBY LEAGUE WRITER.
WEEK 24 2017
MONDAY, JUNE 12
Mt Etna, the highest volcano in Europe, is the focus of our Albatross Tour Group, as our 16 day, Southern Italy tour enters its 10th day. We are the second coach to arrive at the point where a gondola takes us to the ski area (no snow at this time of year), followed by a four wheel drive bus trip to the ‘smokin’ area’, where, just three months ago, a BBC television crew had to run for their lives, after the mountain erupted. They suffered minor injuries. There is a girl in a South Sydney Rabbitohs’ rugby league jumper in one of the tour groups.
Kathrine Smith, the only Kiwi on our trip (the rest are Australians) has a fall (as she goes off track) and badly hurts her knee. Our mountain guide speaks Italian and French, but no English, and our tour leader, Richard Ellis (from Somerset)  has a few (choice) words with him, as the mountain belches acidic smoke. (Richard expected a guide with English skills).
Lunch at Forza d’Agro in the hills near Taormina, where part of the film, ‘The Godfather’ was made. Lunch is amazing – prawns, mussels, the lot, and all sorts of liquors to finish.
Back in Australia, Queensland coach, Kevin Walters makes seven changes, following the loss to New South Wales in Game one of the State of Origin series. I rate one of the new boys, Tim Glasby, the ‘new Jacob Lillyman’. Glasby, originally from Rockhampton, plays for Melbourne Storm. Lillyman, originally from Richmond in western Queensland, is contracted to New Zealand Warriors. They are both no frills forwards, who can be relied on in tough situations. 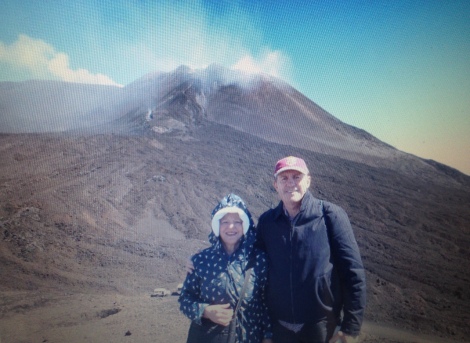 Photo 1: Marie and I on Mt Etna
TUESDAY, JUNE 13
Embarrassing moment for me – I took our room key with me on the coach, and the hotel had to send a car down the motorway to retrieve it. We cut through the heart of Sicily (dry countryside) to Piazza Armerina, where a guide takes us through the opulent Villa Romana del Casali. UNESCO Heritage listed, this 1,700 year old villa was covered by a mud slide in the 12th century, which preserved its mosaics. Some of the mosaics are quite saucy, if you get my drift. Lunch at nearby trattoria is very good – pork and mushrooms; veal chops etc. The Moretti ‘tallies’ go down a treat, on a hot day. As I was getting on the coach, I brushed my shoulder on a cactus, and the needles dug into me.
Tonight we stay at Agrigento on the South Coast, and our room has great views of the Valley of the Temples. There is a lovely terrace location for dinner, overlooking the valley. Our Nigerian waitress shows photos of her boy, and is reprimanded (only lightly) by the boss for not concentrating on her work.
WEDNESDAY, JUNE 14
Claudio (our guide) takes us through the Valley of the Temples, and displays a sense of humor as dry as the countryside. He has traveled extensively in Australia, and loves us. How couldn’t he. Lunch at a farm at Mandranova, where there is also olive oil tasting. Back in Agrigento,  Sydney boys, Lucas Scott, Steve Chidgey and I have a few beers at a bar, near our hotel, while our ladies shop. I mean, is that a stereotype or what!
Television weather man says, “It is official. Italy is experiencing a heat wave”. Thanks scoop.
THURSDAY, JUNE 15
First stop, the fishing port of Sciacca. I immediately think of Queensland politician, Con Sciacca, who was born on Sicily. The co-op only has frozen seafood. Sounds like Queensland.
Lunch at Vittoria’s at Porto Palo, right on the beach. This restaurant got a mention on the BBC series, ‘Sicily Unpacked’, and Vittoria (the proprietor) is making the most of it. He poses for our cameras, with two live lobsters. Not for the first time, some members of our group (quite rightly) blow up about the quality of the wine. The Italians must think we come from a land where there is no wine, because a lot of what they dish up is basic, considering the price of the trip. On several occasions, we have been able to get upgrades, more worthy of our palates. Tonight, we stay at Baglio Oneto Hotel, inland from Marsala.

Photo 2: Vittoria with (from left), Margaret Scott, Marie Ricketts and Justine Sanders
FRIDAY, JUNE 16
Visit Erice, overlooking the port of Trapani. There are two castles, as well as the remains of ancient Phoenician fortifications. It is great fun exploring the old alleys and cobbled streets. On our way back to our hotel we visit the amazing temple and theatre ruins at Segesta.
SATURDAY, JUNE 17
Board a boat at Castellamare del Golfo, a fishing port, for a cruise through Zingaro marine reserve, to San Vito lo Capo. Quite a few of us, Marie and I included, leap from the (stationary) boat, and swim at Scopello, where there are so many blue fish. Lovely fruit and cake on board and all three crew members are friendly and funny. Gabriella Bortuzzo from Brisbane, points out that the deck hand, wearing short shorts, is ‘out there’, and she is correct. Seafood cous cous for lunch in San Vito, where I pay 15E for a bottle of artisan beer – a Belgian style. Sword fish for dinner.
Back in Australia, our eldest boy, Damien is acting deputy principal at Beenleigh High for three weeks.
SUNDAY, JUNE 18
Drive to the Sicilian capital, Palermo, where a local guide points out the landmarks. So much rubbish on the beaches, coming into Palermo. It rains for the first time on the trip. Kathrine Smith makes a presentation, on behalf of the group, to our driver, Andrea, who is taking the coach back to Rome tonight. Marie and I lunch at Da Bacco in Lane Orologia. Very good. I have fried prawns and Marie, mussels. At our farewell dinner, at the Grand Hotel Villa Igiea, I make a speech on behalf of the group, and present our guide, Richard Ellis with a gift.
On the way into Palermo, we had passed a monument to a judge, assassinated by the Mafia. That night we heard that our driver, Andrea, had been ‘asked’ for 150E to look after his coach, when he pulled up outside our hotel. He told them (Mafia, we presume) to get lost, as he was heading to the ferry terminal. The Mafia are in decline on Sicily (so we are told). Not sure what the situation is, in Australia’s Riverina! 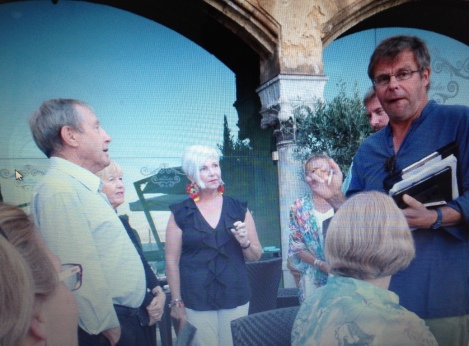