Gary Roberts was one of my favorite players of the mid-1960s.
A skilful five eighth for Gold Coast Tigers in the Tweed/Gold Coast league, he was a joy to watch, alongside the likes of former State halfback, Bobby Cook; future Roosters’ forward, Laurie Freier; tough campaigner, Norm McFadden and veteran hooker, Keith Hookway.
In those days, my heroes were ‘local’ footballers, given televised rugby league was in its infancy.
Long after Gary retired, he and Keith Hookway were to the forefront of a new publication, which aimed to inform players, parents and coaches of the ideas and latest developments in coaching.
The first edition was a real collector’s item, at 106 pages, full of great articles, and advertisements.
Those were the days, for the written word.
A copy of the magazine was made available free to to every child between the ages of seven and 17, who played league in Queensland.
Queensland’s divisional and coaching and development officers at that time were: Brisbane North: Alex Corvo; South: Shane McNally; Central Qld: John Harbin; Wide Bay: Don Oxenham; Nth and North West Qld: Gary Dunbar; Townsville and South: Paul Heptonstall; Ipswich and Gold Coast: Phil Hortz; South West (including Toowoomba/Darling Downs); Gary Lawrence. Former Test halfback, Dennis Ward was QRL coaching and development chief, while Glenn Bayliss was coaching and development manager.
McNally said the clean cut image and public appeal of players like Allan Langer, Steve Renouf, the Walters brothers and “wholesome country boy”, Willie Carne had quickly won parents back to allowing ‘little Johnny’ to play rugby league.
Now, of course, mum wont ‘little Johnny’ play the game because of size disparities.
Corvo grew up in Canberra, and his initial dream was to play Aussie rules, but Canberra didn’t have a team in the AFL. The Raiders were part of the NSWRL, so he headed in that direction. He played for Canberra from 1986 to ’91 and then for Yanco-Wamoon in the Group 20 competition, with former Balmain cult figure, Kerry Hemsley, his co-prop.
Former Test halfback, Barry Muir had several informative articles in the magazine. And there were player profiles on Sid Domic and Gary Larson.
Former State coach and Easts’ legend, Ted Verrenkamp wrote an article on the quality of captaincy.
And new team on the block, South Queensland Crushers had articles by chairman, Dick ‘Tosser’ Turner; chief executive, Darryl Van de Velde and coach, Bill Gardner.
The Crushers were to have a team in the 1994 Brisbane competition, before entering the (ARL) national league in ’95. Players signed for ’94 included former Fijian rugby union international, Filimoni Seru; Mackay youngsters, Travis Norton and Clinton Schifcofske; Broncos Martin Locke, James Donnelly and Darren Plowmen; Qld Schoolboys’ skipper, Nathan Antonik from the Gold Coast, and giant Kiwi prop, Grant Young.
Former Brothers and Easts, five eighth, Graham Herlihy was to coach the side in ’94, with the Crushers training at Brothers’ former home ground, Corbett Park, Grange.
The magazine advertisements included one from New882 (4BH), ‘the radio station that brings you all the Broncos news’. John McCoy and Wally Lewis were featured in the ad as ‘The King and I’.
There also was an ad. for Struddy’s Sports World, with a photo of former Test halfback, Ross Strudwick alongside up and coming Broncos’ winger, Wendell Sailor, who was employed by ‘Struddy’. 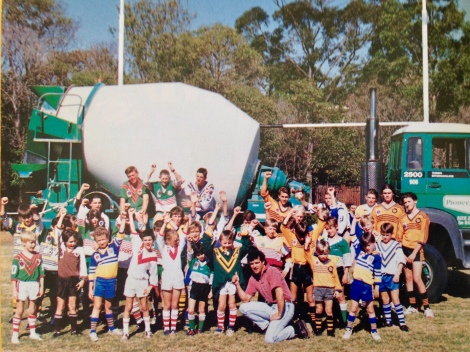 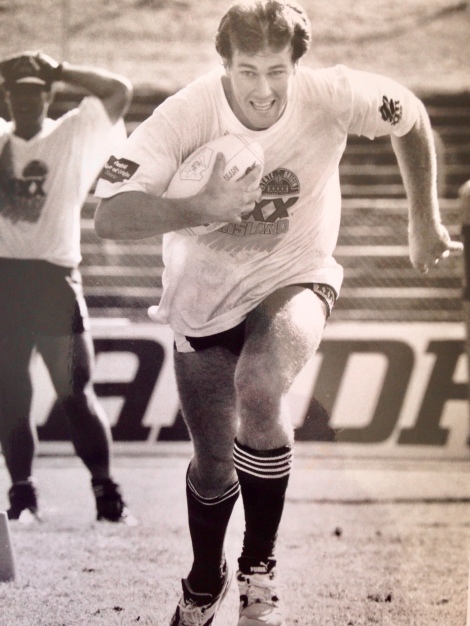 One response to “COAST BOY THINKS OUTSIDE SQUARE”