FEBRUARY 1959
ENGLISH rugby league commentator, Eddie Waring had several amazing insights into a major blow-up, which could have derailed Great Britain’s Ashes campaign in Australia the year before.
Waring had exclusively revealed that the English Rugby League Council had reprimanded coach, Jim Brough; business manager, Bennett Manson and team manager, Jim Mitchell over the on-tour ‘squabbles’.
Flash point, according to Waring, was the tussle for control of the players, between Manson and Mitchell.
“It was a smoldering volcano of a quarrel, yet it never erupted,” Waring wrote in his syndicated newspaper column.
Mitchell was described as ‘The Garbo’ (as in Greta Garbo) of the party, because he did not sit with his co-manager for meals.
“Was there too big an age difference between the older Manson and Mitchell,” wrote Waring.
“I don’t think Manson liked Mitchell sporting a beard, or the fact he stripped and trained with the players.
“Mitchell certainly didn’t like the reports on players, sent to England (by Manson)”.
Waring gave a few examples.
“One player was described as “hopeless, with his general behavior in keeping with his play. Another player was rated ‘too slow’, with his only distinguishing feature, his tummy, while another player was described as bone lazy, ‘In a football coma’.”
Waring, who had covered four tours of Australia for the BBC and various newspapers, said he had never seen a more harmonious crew than the ’58 side, which won the Ashes series 2-1, after losing the First Test in Sydney.
It was the series in which skipper, Alan Prescott played through almost the entire Second Test – at Brisbane’s Exhibition Grounds – with a broken arm.
A 10.30 p.m. curfew was placed on the players after the First Test loss in Sydney, and one player asked to be sent home, after he was scolded by one of the team officials (Waring didn’t name either man).
“This blew up into the players’ demand for only one boss to give the orders,” Waring wrote. “Mitchell and Brough clashed over Mitchell’s plan to play himself at Lismore (against North Coast), if the injury stricken party needed him.
“Brough said if Mitchell played, he would quit. It’s an insult to the Rugby League.”
There had been a precedent, with team manager, John Wilson playing on the Brits’ 1920 tour of Australia. And the players were devoted to Mitchell, so much so, they played, even when injured, when he implored them to do so.
Brough had captained the 1936 Britishside in Australia.
The 1958 side played 21 games in Australia, losing only one (The First Test in Sydney). They also were held to a draw by Western Division in Orange. In New Zealand, the Brits played nine matches, losing only one – the First Test in Auckland 15-10. They won the Second Test 32-15 for a drawn series.
The leading try scorer on tour was Wigan centre, Eric Ashton while Warrington fullback, Eric Fraser was leading points scorer with 238 from six tries and 110 goals.
(To read more on the tour, access 1958 Lions Tour on Stevericketts.com.au). 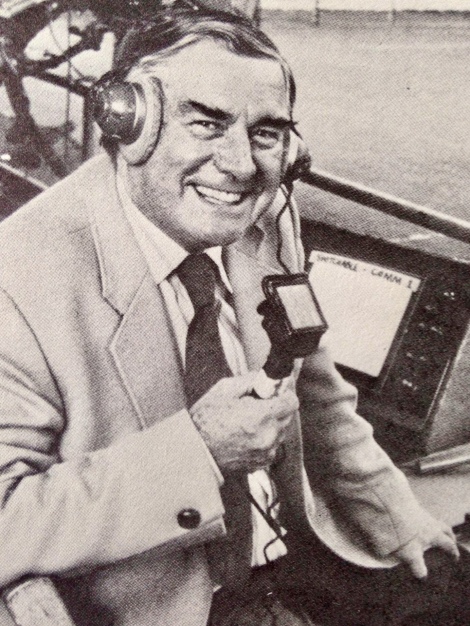 Photo 1: Eddie Waring
Meanwhile, Leeds’ Rugby League club in England, announced the signing of Springbok rugby union centre/winger, Wilf Rosenberg for a 5,000 pounds fee. Rosenberg, the son of a South African rabbi, was married by his father just a week before signing.
Rosenberg went on to play with Leeds and then, Hull scoring 115 tries in 166 matches.