DIARY OF A RETIRED RUGBY LEAGUE WRITER
WEEK 31 2017
TUESDAY, AUGUST 1
Former ABC boss, David Hill launches his sports book, ‘The Fair and The Foul’. I sat beside him at a rugby league, pre-season double header at Salter Oval, Bundaberg when he was president of his beloved North Sydney Bears. My brother, Andrew is back from Vietnam, where he lives. We go to Brothers Leagues for a few drinks with the regulars.
WEDNESDAY, AUGUST 2
I interview former Australian Rugby League forward, Lew Platz at Broncos Leagues Club, for an article in Men of League magazine. Broncos football Club chairman, Dennis Watt is there, and we have a chat. My brother, Andrew and I have a brisket burger at cafe at Red Hills Bowls Club, after walking past the Broncos’ gym area, where basketball is being played. Also dining at the ‘Bowlo’ are Broncos’ players, Jordan Kahu and Corey Oates, as well Broncos head of Performance Analysis, Scott Barker. Chat to injured Broncos’ hooker, Andrew McCullough, who is on crutches, out for the season. If all footballers were as polite and respectful as McCullough, rugby league would be viewed more sympathetically by the wider public. Must be his country up-bringing.
Former Test winger, Eric Grothe Snr is interviewed on ‘League Live’ on Foxsports and talks about the wild celebrations after Parramatta won their first premiership in 1981.
THURSDAY, AUGUST 3
My wife, Marie turns 67 today. Lunch, followed by the movie, ‘The Big Sick’. Very good. Drinks tonight at our local Grange bar, Quincy’s.
Former Balmain prop, Steve ‘Blocker’ Roach praises the pugilistic skills of his South Sydney rival, Les Davidson. Broncos’ hard man, Gorden Tallis once told me the only player he wouldn’t take-on, was Davidson, nicknamed ‘Bundy’.
FRIDAY, AUGUST 4
I watch part of an old Balmain v Penrith match, called by Ian Maurice. So tough, so skilful, the likes of Peter Kelly, Mark Geyer, and Steve ‘Blocker’ Roach running around. Darts is being played at Brothers’ Club tonight. Good to see. My father and his great mate, Don ‘DOK’ Kaden loved a game of darts at the Winsome Hotel, Lismore.
SATURDAY, AUGUST 5
Watch Leeds v Wigan, before heading to Gold Coast. Adam Cuthbertson throws a great pass, to set up a Leeds’ try. Take our granddaughter, Parker to McIntosh Island Park at Main Beach  – ‘peacock park’, we call it. A little boy tackles Parker in the sandpit of the playground. No harm done. ‘A rugby tackle’ says the little boy’s dad, who, I suspect, knows nothing about either rugby code. Murwillumbah Cycle club members are having coffee at Le Jardine in Tedder Avenue.
Our son, Damien, a teacher at Beenleigh High, says some of the boys on league scholarships are not doing the necessary gym work.
Broncos thrash Gold Coast Titans at Robina. Jarryd Hayne is awful at fullback for the Titans. Gold Coast skipper, Ryan James, a fiery customer, shows commendable restraint on a couple of occasions.
SUNDAY, AUGUST 6
Listen to Macca on ABC Radio, as he broadcasts from Blackall, where I have been only once – to cover a court case for the Telegraph newspaper, back in the 1970s.
Australian Test forward, Nate Myles plays for Brisbane Easts in the Intrust super Cup. Myles is contracted to Melbourne Storm, but cannot force his way into first grade. A contingent of Beenleigh High league boys travel to Kougari Oval, Wynnum to watch teacher, Connor Broadhurst, play in the centres for Burleigh Bears. Wynnum forward, Aaron Rockley makes a shocking crusher tackle on Henare Wells. Burleigh utility star, Jamie Dowling (grandson of my great mate, John Dowling) makes a sensational tackle on Peter Gubb. Our eldest boy, Damien (who also teaches at Beenleigh High) and his wife, Emma toast their sixth wedding anniversary, enjoying cheese and wine overlooking the Southport Broadwater.
There is a new league show on television – Footy Queensland – with former internationals, Gary Belcher and Scott Prince and former Qld Origin forward, Scott Sattler the hosts.
Former rugby league caller, Billy J Smith is interviewed on Channel 7, talking about the old Radio 10. 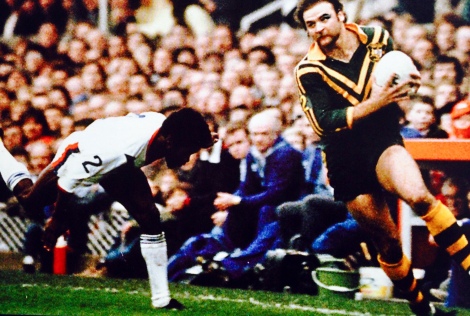 Ben Ikin (left) with former Broncos’ Test prop, Shane Webcke at a Men of League function.
%d bloggers like this: