by Steve Ricketts
It was the tour which saw Wayne Bennett lift the media ban he had imposed on me, three years earlier.
The peace accord was brokered by Australian Rugby League chief executive, Geoff Carr when he found out I was to cover Australia’s tour of New Zealand, England and France, for ‘The Courier-Mail’ and the ‘Sydney Telegraph’.
I think if I was covering the tour, only for the Brisbane based Courier-Mail, Geoff wouldn’t have cared. But, there was no way the ARL would tolerate a black out for its Sydney readership.
Broncos’ coach, Bennett had not spoken to me for three years, because he believed my coverage of Justin Hodges’ demotion to Queensland Cup, after he signed with the Sydney Roosters, had been unfair.
Leading up to the 2004 Tri-nations tour (where Bennett was to be coach, after succeeding Chris Anderson), there was the little matter of the NRL grand final, which I was to cover – solely for The Courier-Mail.
On Thursday, September 30 I covered the Grand Final Breakfast and then recorded an episode of ‘Main Game’ for FoxSports (remember ‘Main Game’? I didn’t think so).
Our youngest son, Lliam (then 20) flew from Brisbane to Sydney that day, and, after a Chinese meal, ‘Gold Coast Bulletin’ chief league writer, Trad McLean and I took Lliam to ‘The Rocks’ historical area, and then the Bourbon and Beef Club at Kings Cross (another historical area).
The next night we attended a dinner, hosted by Carlton and United Breweries, where I had a great chat with dual rugby international lock, Ray Price. I somehow managed to get Lliam an invite. He enjoyed the night, but was taken aback by a fellow journalist, who was very loud. No names, no lack drill.
Grand final eve was spent at the Clovelly Hotel (of course), where I caught up with the likes of former Australian skipper, Laurie Daley; player-manager, Steve Gillis and Geoff Carr. All around Sydney, there were cars, decorated in Bulldogs colors, with most of the drivers seemingly of Lebanese origin.
Back in Brisbane, 48 hours after the grand final, (the Roosters lost, so we’re not going to dwell on that), Broncos’ media man, Tony Durkin hosted league journos to lunch, with Broncos’ skipper, Gorden Tallis joining us about 3 p .m., on his return from Sydney.
Channel 7’s Ben Davis and I debated the merits of Aussie rules. (He was good mates with Lions’ AFL star, Jason Akermanis).
On October 7, I recorded the last episode of ‘Main Game’, and then attended the Broncos’ Ball, where Bennett stole the show with his speeches. He loves it, up there, on stage.
On Saturday, October 9, the day my sister Kerr-Anne turned 51 (she was working for Aramco in Saudi Arabia), I voted in the Federal election (John Howard was returned for a fourth term as Prime Minister), followed by dinner at my other sister, Gay Lynch’s house, with her husband, David and my parents, Jon and Lola; and my wife, Marie.
The next day I flew to Sydney to go into camp with the Australian side, at the Crowne Plaza, Coogee. Wayne Bennett was on the same flight.
While waiting at the luggage carousel at Sydney airport, Wayne and I were side-by-side.
The conversation went something like this:
Me: “So, Wayne. I believe you have lifted your media ban?”
Wayne: “That’s correct”.
Me: “That’s good. Can I do a quick interview now?”
Wayne: “Don’t push your luck, Steve”.
Happy days. 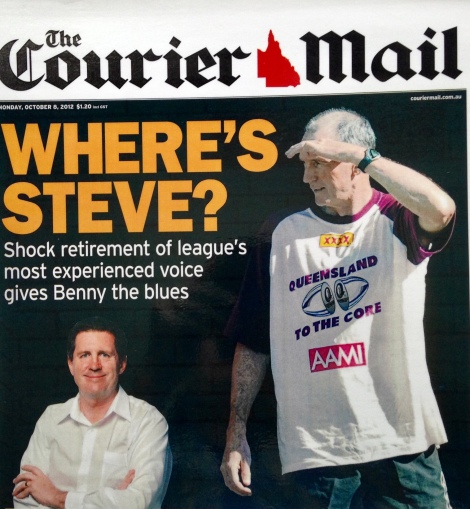