DIARY OF A RETIRED RUGBY LEAGUE WRITER
WEEK 32 2017
MONDAY, AUGUST 7
Take our grandson, Ethan to Ithaca Pool Park. So much rubbish at the skate-park. The skateboarders probably dabble as environmental protesters in their spare time. Drinks with brothers, Steve and Jim Gannon, at Brothers’ Leagues. Steve lives at Moura in the Banana Shire of Central Queensland.
Balmain icons, Kerry Hemsley and Kevin Hardwick are guests on Matt Johns’ Show on Foxsports. They are hilarious.
Death of Australian athletics legend, Betty Cuthbert. She lived at Lismore in northern New South Wales for a time. Also learn of the passing of Janet Seidal, who was regarded as Australia’s first lady of jazz, but was most popular in Japan.
TUESDAY, AUGUST 8
It is our daughter, Melanie’s birthday, and it is such a shame she is so far away, working in Hong Kong. My wife, Marie hosts morning tea for the ‘Playgroup Ladies’. I escape by taking our grandson, Ethan to Q Roasters, Stafford, for a coffee. Marie and I are babysitting, while Ethan’s dad, Lliam works here in Brisbane, and his mum, Channelle is on assignment in Darwin. At Grange Library playground, I chat to a chap who moved to Brisbane from Sydney in 1977, and had a newsagency on Day’s Road, Grange. He  lived in Lismore for six years, where his dad managed Woolies. They left after the 1954 floods.
Death of singing legend, Glen Campbell. His song, Rhinestone Cowboy, was a favorite of Australian rugby league forward, John Payne.
WEDNESDAY, AUGUST 9
On radio TAB, morning sports host, John McCoy says he saw the great Sir Donald Bradman bat in a testimonial match at Perry Park in Brisbane. I didn’t even know they played cricket at the ground, which is best known now as a soccer venue.
I MC Men of League lunch at Broncos Leagues, with former Test forward, Lew Platz the interview subject. Lew was best man at the wedding of my former Murwillumbah Brothers’ teammate, John Dowling. Learn today that Taree Bowls Club has closed, one of many ‘bowlos’ around the country shutting their doors. In 1975, I watched the Australia v England World Cup rugby league match, from the SCG, on the Taree Bowls ‘big screen’. Lew Platz played for Australia that day, with England forcing a 10-10 draw, thanks to a late try by ‘super sub’, Ken Gill.
THURSDAY, AUGUST 10
Another MC job today, this time for the Beer and Beef Club at the Ship Inn, South Brisbane. My interview subject is lawyer and funds manager, Greg McMahon, a nice bloke, who makes some good points. Born in 1969, Greg is the eldest of six kids, and now has six of his own. Stella Artois mid-strength is the beer provided by Carlton and United Breweries, while Sirromet provide a merlot.
Learn of the passing former Great Britain rugby league skipper, Chris Hesketh, a statesman like figure for his country at a time when some of the best Brits were moving to Australia to play club football, and, under the rules of the day, could not play for their country. I saw Hesketh play for Britain against Australia in the First Test of the 1974 series, at Lang Park. An Englishman from the Salford club, Hesketh started in the centres alongside Welsh dual rugby international, David Watkins (also Salford), but moved to lock when forwards, George Nicholls (St Helens) and Keith Bridges (Featherstone) were injured. Australia won 12-6, with Australian winger, Warren Orr (Brisbane Wests) scoring the only try. Hesketh played 23 Tests between 1970 and ’74, all from the Salford club.
FRIDAY, AUGUST 11
Cronulla captain, Paul Gallen, one of rugby league’s greatest warriors, plays his 300th NRL match for the Sharks, against the Broncos at Suncorp Stadium, but the boys from ‘The shire’ have no answer to the skill, speed and power of Brisbane, who win 32-10.
Watch the match with league historian, Lyle Beaton, who shows me highlights of a French club match from the early 1970s. Former Australian skipper, Wally Lewis hands out cakes, made by his wife, Jacqueline. Chat to Greg ‘Brandy’ Alexander about Canterbury coach, Des Hasler, and how different he is compared with the young man who toured Britain and France with the Kangaroos in 1986. Far more intense now, obviously.
SATURDAY, AUGUST 12
Brothers belt Arana Hills in a Second Division rugby league clash at Gibson Park, Stafford. Chat to Angie O’Brien, the wife of prominent coach, Gary O’Brien; as well as former Brothers’ top grade winger, Noel Russell, a Charleville boy.
Former Test prop, Luke Bailey runs the water for the Illawarra Steelers in a New South Wales Cup match. Luke is an Illawarra product.
Dual rugby international, Brad Thorn plays in a police charity rugby league match at Carina in Brisbane’s south east.
SUNDAY, AUGUST 13
Old Boys’ Day at Souths Magpies in Brisbane and former Test fullback, Gary Belcher, and former hooker, Mick Davis hand out jerseys to the current players. I recognise the likes of Chris Phelan, Bob Hudson and Billy Argeros in the Davies Park crowd. Channel 9 commentators, Peter Psaltis and Scott Sattler pick two of their favorite Souths’ players. Psaltis nominates indigenous winger, Floyd Hill, while Sattler opts for lean second rower, Ash Lumby.
Channel 9’s Danny Weidler has a scoop that Benji Marshall will return to Wests Tigers, from Brisbane Broncos. Channel 7 newsreader, Kay McGrath’s Kiwi roots come through, when she pronounces dancing, ‘darncing’. 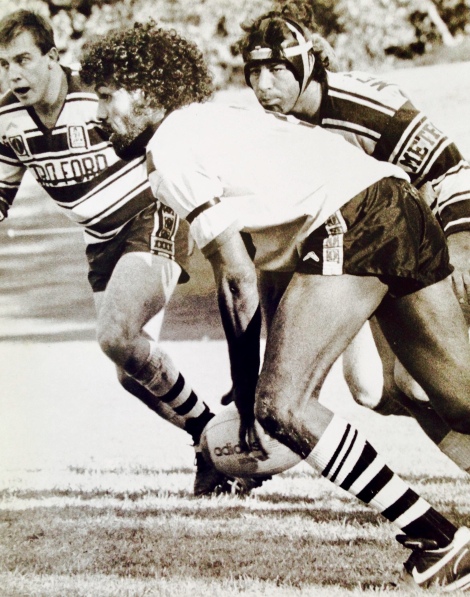