MAY 1994
Broncos’ Queensland State of Origin forward, Gavin ‘Jed’ Allen was banned for 12 matches for a shoulder charge gone wrong, on Cronulla-Sutherland halfback, Paul Green.
Allen stood to lose $30,000 in match payments and the ban jeopardised his chances of negotiating a lucrative new deal with Brisbane.
After an injury plagued 1993, the then 28-year-old Allen, had put off contract talks, backing himself to have a strong 1994, to put himself in a strong bargaining position when he sat down with chief executive, John Ribot.
Broncos’ skipper, Allan Langer rated Allen a certainty for the Queensland side, which was to be chosen later in the month.
Allen was placed on report by referee, Graeme West in the 31st minute of the match at ANZ Stadium, with Brisbane leading Cronulla 10-0. Brisbane went on to win 34-2 and Green took no further part.
Green, the 1993 Brisbane Rothmans Gold Medal winner (from the Easts’ club) said he had no recollection of the incident.
“All I know is, he didn’t miss me,” Green said. “It wasn’t exactly a happy home coming.”
In 2013, when I interviewed ‘Jed’ for my book ‘Bennett’s Broncos’, he told me he still believed the tackle was an accident, and should not have gone to the judiciary.
“I didn’t mean to do it, but it looked terrible,” Allen said. “I think we (the Broncos) held the record for having the most number of players out, from different incidents.”
Allen played the 1995 season for Brisbane, and then finished his career with the London Broncos, in 1996, the first year of summer Super League.
Cronulla prop, Danny Lee also was placed on report, for punching Broncos’ winger, Michael Hancock.
Originally from Keerrong, just outside Nimbin, Lee said he was merely retaliating, after Hancock hit him a few times.
Nineteen-year-old Wendell Sailor played in his specialist wing position in the first half against Cronulla, but played second row in the last 15 minutes, when Allen was replaced.
“I’ll never bag the forwards again,” Sailor said. “They always whinge when the backs drop the ball after a scrum win and I can see why. It’s hard work packing in the scrums, particularly when you have a bloke like Peter Ryan behind you, making sure you give plenty of push.”
Former Test forward, Greg Platz from Clifton on the Darling Downs, attended the match, and was impressed with Pittsworth product, Mark Hohn, describing him as more complete footballer than the one who first came to light with the Toowoomba Clydesdales.
After the match, the Cronulla dressing rooms resembled a Brisbane Easts’ reunion, with ‘current’ Tigers like Ian Stains, Steve Dowden and Sean Davis catching up with the Sharks’ signings from Langlands Park, Paul Green, Andrew Neave and Adam Maher. Maher, 21, brought off a number of bone jarring hits on Broncos’ players.
Cronulla’s giant 17-year-old prop, Adam Ritson played 55 minutes, his longest stint since coming into first grade from Cronulla’s De la Salle College. Ritson burst through Broncos’ Test prop, Glenn Lazarus on one occasion, but otherwise came to a shuddering halt whenever he clashed with his more experienced opponent.
“He hurt me there, once or twice,” Ritson said.
Cronulla won reserve grade 14-10, with Mat Rogers, son of Cronulla legend, Steve, scoring a try and kicking three goals for the Sharks.
Mat had been a boarder at The Southport School and played rugby union for Australian Schoolboys. In 1994, Mat’s dad was based in Darwin and coached the Northern Territory Rugby League side.
The Broncos’ best was indigenous halfback, Leo Dynevor, who had just returned from a stint with London Broncos. He had good support from lock, Anthony Siebold; second rower, Darren Shaw and winger, Scott Blacker.
Gold Coast Seagulls’ hooker, Ray Herring was banned for four matches, on a high tackle charge, arising from the match against Canterbury.
Eddie Fallins, a 27-year-old house painter, was named as Herring’s replacement, for the match against Canberra. Fallins had been sacked by Seagulls mid-way through 1991, for disciplinary reasons, and had gone back to the Group 18 competition.
“I was always hungry to return to the Winfield Cup, but I thought I had done my dash,” Fallins told me.
In Brisbane’s XXXX Cup competition, Broncos’ winger, Leon Yeatman was sent off in his side’s 22-8 loss to Souths at Davies Park. Yeatman, a former Qld under-19 rep, was marched by referee, John Topp in the 34th minute, after a desperate try saving tackle on Souths’ counterpart, Floyd Hill. At that stage, the scores were 6-6, and it wasn’t until five eighth, Chris Hastings scored eight minutes from full-time that the Magpies looked totally in control.
Footnote: Gavin Allen underwent a successful heart transplant in 2019, the life saving operation required because of a genetic heart condition. Another famous rugby league player to undergo a heart transplant was former French captain, Francis de Nadai. 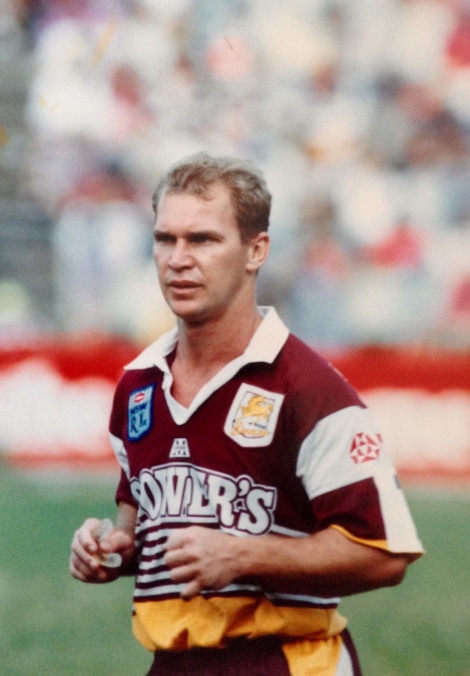