JUNE 1969
PROP FORWARD, John Sattler led Australia to a 20-10 First Test win over New Zealand at a packed Carlaw Park in Auckland, with his South Sydney teammate, Ron Coote scoring two tries in a dazzling display.
But the crowd favorite was blonde haired Australian fullback, Les Johns, whose electrifying runs, skilled handling and accurate kicking in his exchanges with Don Ladner, brought frequent applause.
On one occasion, Johns, a Newcastle product, who played for Canterbury-Bankstown, was hit as he took a pass, and the ball popped into the air. As the tackler swung Johns away, Johns was still able to kick the ball 30 yards towards the New Zealand goal line.
Debutant second rowers, Bob McCarthy (South Sydney) and Ron Costello (Canterbury) tackled magnificently, and did not take a backward step.
Giant Kiwi prop, Oscar Danielson tried to steamroll the Aussies, but was often put on his backside.
The Australians had opened their tour with a 17-13 win over a young North Island side at Rotorua on May 27. North Island included former All Blacks forward, Vic Yates, whose brother, John had played league for the Kiwis in the 1950s.
North Island’s star was Maori winger, Phil Orchard, who surprisingly was omitted from the Kiwi’s Test side. Centre, Ray Wilson, 21, was another to impress.
Australia’s Queensland backrow forwards, Ian Robson and Col Weiss played well, but were never a chance of making the Test squad. Hooker, Elwyn Walters was ordered from the field by referee, Pont in Rotorua, but allowed to remain after Sattler undertook to move him out of the front row. Walters had been heavily penalised for striking for the ball too early.
The day after the First Test, Australia defeated South Island 24-15 in Christchurch, scoring six tries to one, despite being heavily penalised by referee, Jim Campbell from Wellington.
Australian fullback, Graeme Langlands was lucky not to be sent off, after he flattened fiery South Island halfback, Gary Clarke with a perfect right hook, after Clarke had tried to rough him up in a tackle.
Two days later, Australia defeated Wellington 48-7, with giant Brisbane Brothers’ forward, Dennis Manteit in fine tough for the tourists, scoring four tries. Dual international winger, Mike Cleary also scored four tries, while Les Johns kicked eight goals and landed a 50 metre field goal.
The Kiwis would go on to square the two Test series with a 18-14 win in the return clash at Carlaw Park. Australia finished the tour with a 15-14 loss to Auckland. 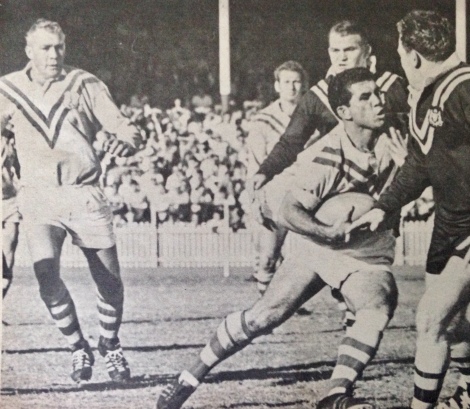 Photo 1: John Sattler takes up the ball for City against Country at the Sydney Cricket Ground in 1969, before leading Australia in New Zealand. That’s John Wittenberg on the left and Graeme Langlands in the background. Behind Sattler is Country’s Peter Dimond. The other Country player is Bruce Delaney.