Edward ‘Ted’ Christian Weber, OAM, a stalwart of Rugby League in the Wide Bay district, has passed away, aged 86.
Maryborough based Weber, was a Life Member of the Queensland Rugby League, and still served the game he loved, long after he stepped down as a QRL director in 1998.
Weber was a noted historian and author, and undertook a number of literary projects, including ‘Hard Yards. Rugby League Recollections Maryborough 1910-210‘, and ‘Saints Alive The History of Rovers Rugby League Club, 1891 – 1991’. He also had his own column in the ‘Maryborough Chronicle’ and reported on local league games.
In 1989 Weber was appointed manager of the Queensland Residents’ team, for a four match tour of France. The Greg Reynolds’ coached side returning undefeated and that tour remains the only visit to France by a State team. Weber also managed State Residents’ sides on trips to Papua New Guinea and New Zealand.
I covered the French tour for ‘The Courier-Mail’, and Ted worked tirelessly to make things run smoothly. He was sometimes the victim of practical jokes by the players, particularly Kevin Langer, but there was nothing nothing nasty, nothing that would leave a sour taste in the mouth.
At the start of the tour, Ted made it clear to French officials, the Queenslanders were there to help the game in France by providing high standard competition, without it being of the elite category of Kangaroo touring sides.
But he warned that the Queenslanders would not tolerate one sided refereeing displays.
“It essential the French don’t get a false sense of how good they are by winning matches through an avalanche of penalties,” Weber said.
(In 1978, a local referee penalised the Kangaroos 33-1 in a match against the French under-24 side. the French won 20-3, kicking 10 goals, most from in front of the posts).
In 1992 and ’93 Weber managed Australian Test sides coached by Bob Fulton, the highlight the World Cup final win over Great Britain at Wembley in 1992.
In 1994, Weber joined Dick ‘Tosser’ Turner and Keith Welsh on the management team of the Queensland State of Origin side.
Weber received his Order of Australia Medal, in 2007, for his services to rugby league. Ted retired at the 1998 QRL annual meeting, when he was awarded his Life Membership.
His involvement with rugby league began as a member of the Rovers’ club in 1948, when he was part of the undefeated Third Grade side. He was Rovers’ first aid officer in 1970, and then a strapper, before climbing through the ranks, until he became chairman of the Wide Bay Division; a QRL Board member, and a director of the South Queensland Crushers’ Club in the ARL competition.
A fitter and turner by trade (working at Walker Brothers), Weber was also a Maryborough City Councillor.
A Memorial Service for Edward ‘Ted’ Christian Weber will be held at the Maryborough Crematorium on Wednesday, June 26 at 10.30 a.m.
He is survived by his wife, Margaret and children, Ted, Phil, Dianne and Ian. 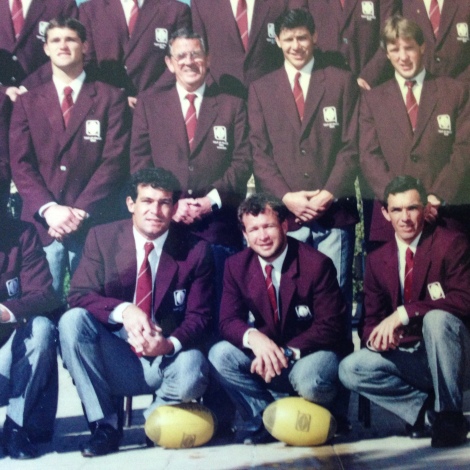 Photo: Ted Weber (second from left, second row) in France in 1989. On his right is Craig Spark and on his left Terry Cook and Bill Johnson. In front: (from left), Bill Holmes (captain), Kevin Langer, Ray Ovens.

One response to “VALE TED WEBER”