Australian Rugby League skipper, Wally Lewis was heckled by spectators at the Sydney Cricket Ground, as he made a speech following the Kangaroos’ 20-7 win over Great Britain, to clinch a 3-0 series win over the old enemy.

When Lewis’s face was shown on the big screen at the ground, the crowd booed wildly and the heckling continued as he spoke after receiving the Ashes Trophy.
Lewis was public enemy number one in Sydney after his magnificent efforts leading Queensland to three straight series wins over New South Wales. But there was no excuse for the behavior of spectators, given he was captain of his country on the day.
In the 1970s, when NSW dominated Qld in the pre-Origin days, Lang Park supporters always got behind their Australian side, even when it was made up entirely of players from south of the border.
And they never booed an Australian skipper. Wally was booed, even though he effectively vacated centre stage to allow the old warrior, Ray Price the honor of being carried from the field in his farewell Test. Bitter rivals, on and off the field, Lewis hoisted Price on to his shoulders at one stage.
In Adrian McGregor’s brilliantly written ‘King Wally’, Lewis said and he and Queensland and Australian teammate, Mal Meninga had the same attitude towards the Sydney crowds.
“We’d kick their arses. Goodbye.”
The Australians were braced for a fiery affair against the British in Sydney, after the first two Tests had been marred by unsavory incidents, the worst an elbow to the head of Australian hooker, Greg Conescu, who lost a tooth in the process. The perpetrator, David Hobbs from Featherstone Rovers, was sent off and banned for three games.
But the Third Test was a tame affair, with the British opting to play football, and they led 7-2 after 33 minutes, thanks to a wonderful individual try by winger, Ellery Hanley; a conversion by Mick Burke and a field goal by halfback, Neil Holding.
Hanley beat Lewis and Bryan Niebling in a 35 metre run, which followed a jinking run from five eighth, Tony Myler, who had evaded four defenders. (Lewis had a high opinion of Myler, who played for Widnes in England).
Australian winger, Eric Grothe scored a try two minutes before halftime, after good lead-up work by Conescu and centre, Meninga. This gave the home side an 8-7 lead and they scored 12 points to nil after the resumption.
The crowd was a disappointing 18,756. The referee was Kiwi, Tony Drake, 38, an Air New Zealand cargo storeman from Christchurch.
In Brisbane club football, Souths left their coach, Wayne Bennett delighted with their performance in accounting for Easts 24-16 at Lang Park.
The Courier-Mail’s Barry Dick rated it the best club match of the season at Lang Park, and also described it as Souths’ star, Meninga’s finest performance for the Magpies. Mark Meskell was the best of the Souths’ forwards, while Martin Bella was impressive in the Easts’ pack.
Norths’ coach, former Test halfback, Barry Muir, lashed out at controversial referee, Jim Ward after he sent off lock, Trevor Gillmeister and winger, Cameron Kelso in the Devils’ 26-10 loss to Valleys at Neumann Oval.
Gillmeister was sent off 14 minutes in the second half for allegedly using an elbow to an opponent’s head, while Kelso was sent off just before full time for kneeing.
“It’s a joke. He must think it’s a game for girls,” Muir said, something a coach would not be game to say today. “If a bloke deserves to be sent off, the player he hits deserves to be carried off.”
Valleys’ coach, Ross Strudwick said Norths had talent, and on paper, a better side than his, but lacked discipline.
“Norths are in a position where losing doesn’t mean anything to them and feel they can’t win, so they have got nothing to lose,” Strudwick said.
Valleys’ forward, Rob Moore, the current QRL managing director, scored two tries and topped the Diehards’ tackle count with 29. He was ably supported in the pack by Keith Neller and John Tapp.
But arguably the best forward on the field was Norths’ Paul Gardner. Halfback, Geoff Bagnall was at his scheming best for the Devils.
Wynnum-Manly forward, Zac Sarra (who is now a magistrate) was sent off in the Seagulls’ 36-14 win over Brothers at Kougari Oval. Sarra was given his marching orders 13 minutes from full time by referee, Harry Dearness. Sarra had been tackled by Brothers’ half, Henry Foster, and Foster was penalised. Instead of leaving it at that, a fired up Sarra threw a roundhouse punch at Foster as he walked away, and, to quote The Courier-Mail’s Kevin Hepworth, “Foster went down for the count”.
When Foster recovered he was sent to the sin bin. Foster and his Wynnum counterpart, Peter Dawes had an enthralling battle. Wynnum’s Test prop, Greg Dowling was the crowd favorite, because of his whole hearted performance.
In the other match, Redcliffe scored seven tries in their 32-0 win over Wests at Dolphin Oval. Test winger, John Ribot scored three himself, but the most dangerous attacking player was Redcliffe fullback, Mitch Brennan.
Wests’ coach, Greg Oliphant said his players had given 100 percent. Three forwards – Clinton Storey, Alex Maverick and Shane Browning – were making their A grade debuts. Browning’s second row partner, Steve Carter was the best forward on the field.

Photo 1: Wally Lewis interviewed by Rex Mossop after a Test. Brad Forrest is the other media man, while Peter Wynn is getting treatment on the table 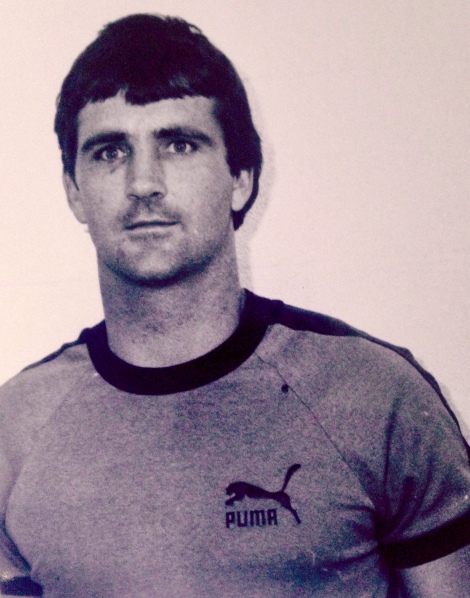 ‘Sister Dorrie’ and Tex Morton. Born Dorothy May Ricketts, ‘Sister’ Dorrie was my great Aunty.
%d bloggers like this: