Villeneuve-sur-Lot is a town synonymous with prunes and rugby league, not necessarily in that order.

It has been a home away from home for my wife, Marie and I on several visits to Europe, and hopefully will continue to be so, for some time to come.
Villeneuve was the first centre in France to switch to the new code of rugby league, in 1934, and has been playing the game ever since, except for the years during World War II when the Nazi regime’s puppet, Vichy Government banned the 13 man code altogether.
The first time I visited Vill was as a journalist, covering the 1989 Queensland Residents’ tour of France, with Greg Reynolds the coach. Queensland’s first match was against an Aquitaine Midi-Pryenees Selection at Stade de la Myre-Mory, Villeneuve and afterwards a reception was held at Bar Glacier in the main part of town.
Eighteen years later I was back in ‘Vill’, with Marie, as part of a European holiday, which had started in Rome, and took us to Sienna, Maggiore (Cinque de Terra) and Nice.
In Nice we realised we were back in ‘rugby’ territory. The city was host to hundreds of supporters of the New Zealand and Springbok teams, in France for rugby union’s World Cup. (France had hosted rugby league’s first World Cup – in 1954).
We picked up our hire car from Toulouse and drove north through lovely scenery to Villeneuve-sur-Lot, located, as the name implies, in the Lot Valley.
We stayed at the residence of Terry and Joyce Holmes from Tyldesley in Greater Manchester, who invested in a property here, and have never regretted it, spending at least three months out of 12 here, instead of the north of England. Terry, like me, is a rugby league writer, and great mates with former French international, Raymond Gruppi. (Terry and Joyce were back in England at this time).
Marie bought meat from a traditional butcher shop, near Terry and Joyce’s house, and we introduced ourselves to one of their neighbours, Madam Causse, 80, who spoke Italian and Spanish, but not English. Well, no-one’s perfect. She had a friendly German Shepherd dog. Her husband, 82, was wheel chair bound. We also shopped at the town market, buying a chook, head and all. No dramas for my wife, who used to behead them when they were alive. (She was raised on a farm).
On our first full day we walked to the hilltop village of Pujols, where French league international, Olivier Elima began his career, with the local junior club. The funeral of Gaston Calixte, 51, was taking place as we arrived.
We also did a number of driving trips from Vill, to places like Fumel, Cahor, Cancon, Villereal, Monflanquin, Beauville, Cassenuil and Agen, some of them beautiful hill top villages.
Agen is a rugby union stronghold, and there is no love lost between its supporters and those of league in Vill.
We even drove west to the famous wine growing centre of St Emilion, in the Bordeaux region.
We also drove north to the Dordogne Valley, to Bezenac and Domme, as well as taking the long and winding road to Rocamadour.
Bernard Tranier was a league journalist in Vill, who looked after us (it is his ambition to own a house in Dewsbury, England because he regards it as rugby league heartland), and we also owe a debt of gratitude to Antoine and his wife, who ran the ‘European Hotel’, and were major sponsors of rugby league. Nothing was too much trouble for them. They regard Brisbane’s Plath family as their Australian family, after Wynnum-Manly utility back, Steve Plath had a successful stint with the Villeneuve Leopards. (Steve’s older brother, John was a Brisbane Bronco). Antoine was manager of Bar Glacier when I covered the ’89 Queensland tour.
Test forward, Paul Sironen was another Australian to have a guest stint in Vill, and his photograph was featured in one of the town’s bars, run by a former president of the club. Also on the wall was a jersey from famous English amateur club, Shaw Cross.
Vincent Wulf, a Samoan, who represented France under residency rules, shouted us to dinner at his favorite Italian restaurant.
Vill’s coach in 2007, was Englishman, Chris Charles from Hull, who played with Castleford, before heading to France.
We saw one match while we were there – against St Gaudens – where we caught up with Olivier Elima, who was contracted to Wakefield in England.
At the post match reception I caught up with former French internationals, Christian Sabatie and Pierre Ailleres. Ailleres, who was coaching St Gaudens’ colts, had captained the Aquitaine team against Queensland in 1989, and his father, Georges captained France in their World Cup campaign in Australia in 1968, a squad which included Sabatie. As a schoolboy I saw the ’68 final between Australia and France at the Sydney Cricket Ground. So it was quite an emotional experience meeting Pierre, for the third time, as I had also interviewed him in Rockhampton in 1991, when he was touring Australia with the French national team.
At the awards ceremony, after the St Gaudens’ match, I met Nathalie Aswad, a business woman, who, at that time, was at the helm of the Villeneuve club. We had a long chat about the value that league added to the town. There were some prominent people who wanted to give up on the code.
At Bar Bistrot I caught up with former Welsh league international, Mike Murphy, a great character, who played for a number of clubs in Britain, as well as Tonneins and St Jacques in France. He played for Wales against France in 1975 and ’77. (Mike passed away on March 19, 2019, aged 77. He was resident in Huddersfield, England at the time).
It was an uplifting night to mingle with people so devoted to rugby league, despite considerable obstacles and bigotry.
The day we left Vill, for Chartres, we had coffee with Madame Causse’, who had a visitor. He asked if I was a rugby man, and I said ‘Rugby Treize’. He replied ‘Bon’. 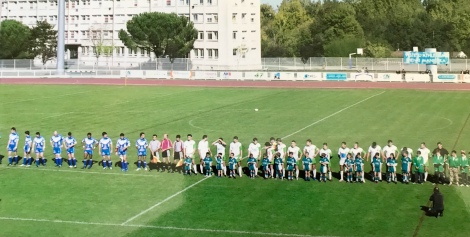 Photo 2: Villeneuve Leopards (right) and St Gaudens line up ahead of a match

Photo 3: Marie Ricketts at Puy-L’eveque on the River Lot