DIARY OF A RETIRED RUGBY LEAGUE WRITER
WEEK 38 2018
MONDAY, SEPTEMBER 17
The last few days of our UK/Irish adventure. My wife, Marie and I walk a leafy path along the River Nore at Castle Durrow, a Country House Hotel in Ireland’s County Laois . We had had a lunch stop at Horse and Jockey, which is a village, as well as a pub. The silks of a 1963 Cheltenham winner are on display near our table. Our barman, Liam told us a couple of jokes, one about a dog and the other about an Indian, with a great memory. I am sure they both would be regarded as politically incorrect. Marie’s sister, Carolyn left for her home in Lismore, Australia today, after spending time with her daughter, Kellie Kelly in Tipperary. Carolyn still calls suit cases, ‘ports’. It’s very much a Queensland/northern New South Wales thing.
TUESDAY, SEPTEMBER 18
We say farewell to Kellie, and drive to Tullamore, over the Slieve Bloom Mountains, with police at every cross roads on the other side, because of the National Ploughing Titles, one of the biggest events in Europe. Lunch at Tanyards Pub, Tullamore followed by a tour of Tullamore Dew distillery, courtesy of Oliver Kelly (Marie’s niece’s brother-in-law) who is in charge of quality control. I was the driver, so I left it to Marie to sample the product. A group of publicans from the Czech Republic had been through that day. Stay tonight at Radison Blue, Dublin Airport, ahead of our flight home.
WEDNESDAY, SEPTEMBER 19
A storm called Ali hits Ireland and the winds are wild. The ploughing championships were delayed two hours, and our luggage can’t be loaded, so our Cathay Pacific flight leaves without it. Our captain is Chris de Croix, a South African. There are amazing views of China – so many rivers.
THURSDAY, SEPTEMBER 20
Taiwanese whiskey is advertised on our flight. It can’t be as good as Tullamore Dew, Marie says. Movies include ‘On Chesil Beach’ and ‘The Commuter’.
Back in Brisbane and our cabbie is Pakistani, and the manager of our town house estate, Harry Moore has his leaf blower at full blast. It is like we have never been away.
FRIDAY, SEPTEMBER 21
Haircut today, and when ‘old Mr Pappas’ asks if I want it short, I say yes, thinking he meant ‘normal short’ but he means short/short. Marie is not happy with the result. To Stafford Tavern for raffles for Brothers’ Rugby League.
Learn of the passing of Brisbane Easts’ rugby league stalwart, Graham Beale, 88, who went on my 1994 Kangaroo tour with his wife, Betty.
SATURDAY, SEPTEMBER 22
Catch-up with Marie’s brother, Kevin Donnelly and his wife, Beth at Alstonville. She has cancer, but is out of hospital for now, and receiving home nursing visits.
Former ABC rugby league commentator and Bishop Park ground announcer, Arthur Denovan turns 90 and has a party at his beloved Norths club, Nundah.
Former Widnes, Lancashire and Great Britain centre, Dennis O’Neill has turned 70. O’Neill played three Tests for Great Britain in 1971/72, but injuries cut short a career which promised greatness. Marie and I were in Widnes, Cheshire for his testimonial season, 1977-78.
SUNDAY, SEPTEMBER 23
Neighbor, Madonna says her parents are doing it tough on the farm at Boonah, because of the drought. Three fires in the area have been started by welding.
Redcliffe beat Easts 36-22 in the Intrust Super (Qld) Cup Grand Final at Suncorp Stadium, which I watch from the Hirer’s Box. (The girl who sings the national anthem has a shocker). Sat beside Men of League State chairman, Darryl Van de Velde and Brian Canavan (NRL) during the match. Redcliffe were deserved winners. Duncan Hall Jnr presents the Medal, named after his late father, Duncan Snr., to former New South Wales Schoolboys Rugby Union rep., Toby Rudolf. Duncan Jnr, a former rugby union international, says he played four times in a month against the All Blacks – for Queensland, Australian Universities and Australia. He admits he went through games without touching the ball. Queensland State of Origin coach, Kevin Walters is chatting to his former Broncos’ teammate, Terry Matterson as I leave the Hirer’s Box. Before the match I had caught up with former Brisbane Norths’ teammates, Shane ‘Cocky’ McMahon and Ziggy Strasser.
Catalans Dragons are guests at Camo Nou for a Barcelona home match, with the Challenge Cup, which Marie and I saw them win at Wembley on August 25, during our UK/Irish trip. 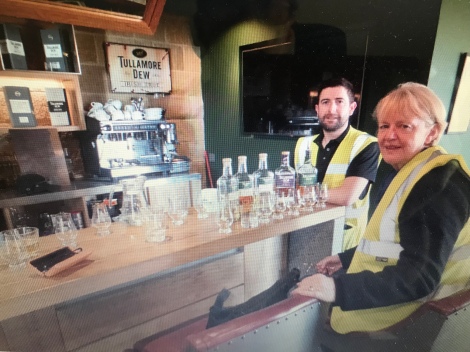 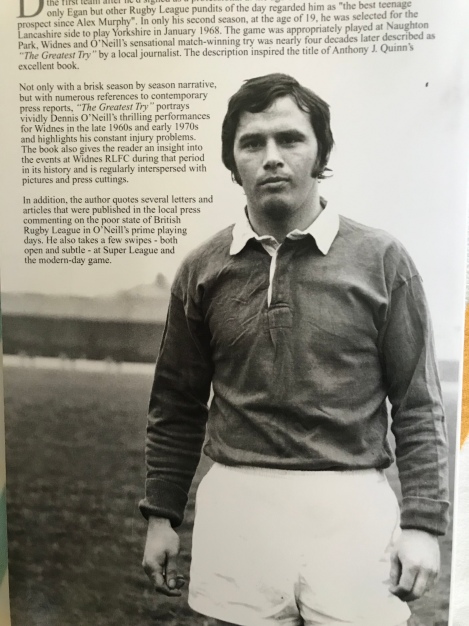