Her Majesty: What is your name?
Yours truly: Stephen Ricketts.
Where do you live?
Murwillumbah.
Where is that?
About 20 miles south of the New South Wales-Queensland border, in the Tweed Valley.
What would you like to be when you leave school?
A journalist.
The Queen: ‘That’s a romantic profession,’ and she moved on to the next school captain.
I think, when I said I wanted to be a journalist, that was the cue to end the chat. I’m sure she would not regard journalism as a romantic profession in 2020, 50 years later.
In April, 1970, I was in Sydney for the Captain Cook Bicentenary celebrations. The meeting with The Queen took place in the science room of Moorefield Girls High School, at Brighton Le Sands, on the site of a former racetrack, not far from Botany Bay, where the great navigator, James Cook made landfall on April 29, 1770.
The Education Department brought many country school captains to Sydney for the celebrations, although only a handful of us were chosen for the intimate chat with the Queen, which was filmed by the BBC. I’m not sure why I was selected. Perhaps it was because I came from the one of the state’s extremities.
Perhaps it was because Captain Cook named Mount Warning (Wollumbin to the indigenous people), in the Tweed Valley, when he continued up the coast from Botany Bay. Today the Murwillumbah High School newsletter is called Endeavour, after Cook’s ship.
Anyway, I have to admit I was nervous, but the Queen, who was much smaller than I imagined, appeared more nervous than me.
I had travelled from Murwillumbah to Sydney, by train, as you could in those days, with fellow school captain, Gail Howard from Burringbar. And we did not have a chaperone. Acting School Principal, Ken Dowdell obviously thought he could trust us. (Regular principal, Joe Elliott was on long service leave).
Gail was billeted by the family of a student from Moorefield Girls High, Lynda Cheadle from Sans Souci, and I was billeted by the family of a student from James Cook Boys High, who lived at Beverly Hills. (I am embarrassed to say I have forgotten his name, but they were lovely hosts).
George Langley was captain of James Cook High. In the 1980s, I worked with a journalist, George Langley, but it is not the same person.
James Cook High had a golden period as a rugby league schools in the 1980s and in 1983 the school captain was David Niu, who went on to play first grade with St George, and is now involved with rugby league in the United States.
James Cook High’s captain in 2019 was Muhammad Hadi Saadi, a reflection of the changing face of the demographics of the area.
Those few days in Sydney, in 1970, were among the most memorable of my life, and not just because I met The Queen.
There were so many things organised for visiting students, including a great spot near Lady Macquarie’s Chair, on the banks of Sydney Harbor, to witness the amazing fireworks which celebrated the event, a forerunner I’m sure to the New Year’s Eve fireworks we see now.
And there was a ball at Rockdale Town Hall, staged by the Mayor, Ronald Rathbone, and featuring Don Burrows’ world acclaimed jazz band.
I took Lynda Cheadle, who had a larger than life personality, which almost overwhelmed this country hick.
Naturally, she was a St George rugby league supporter, coming from the heart of Dragons’ territory.
The Bicentenary was a huge event.
This year (2020) marks 250 years since Cook’s amazing achievement.
Back in 1970, we undoubtedly overlooked many of the obvious implications of Cook’s expedition, for the ‘First Peoples’ of the different places he mapped and explored.
But now I feel we have gone too far the other way.
It was reassuring to see, in today’s Courier-Mail, in Kids@Home, a feature, called ‘Captain Cook 250 years on’.
Our children, Melanie, Damien and Lliam, certainly were told about ‘Cooky’, when they were at home (not sure about school), and during the family’s 1990 visit to England, we drove to seaside Staithes in North Yorkshire, where Cook first felt the urge to go to sea, when he was employed in the village as an apprentice grocer, in a local shop.
The family also visited Whitby in Yorkshire, where Cook was apprenticed to a shipowner, John Walker. All the ships used by Cook on his voyages were built at the Fishburn Shipyard in Whitby. A life size statue of the explorer was erected on Whitby’s West Cliff in 1912, and remains a place of pilgrimage for many Australians, and will into the future, I hope, unless the great man is ignored, or pilloried, in our reshaping of history.
In 2018, Marie and I went to the ‘James Cook. The Voyages’ exhibition in the British Library, London.
There were quite a few Australian accents among the visitors. Maybe one or two had been to the 1970 celebrations. But I bet none of them had met The Queen. 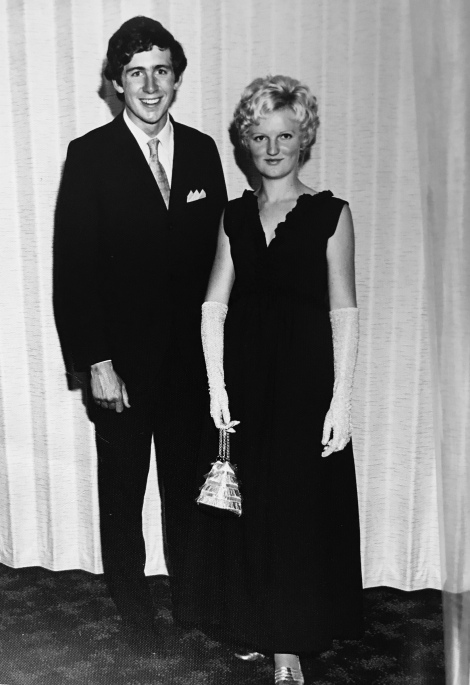 4 Staithes, North Yorkshire, where the explorer, James Cook first felt the urge to go to sea.