MAY 1965
It is still regarded as one of the greatest Wembley Challenge Cup finals.
Wigan’s 20-16 win over Hunslet on May 8, 1965 was a classic game of rugby league, played under the unlimited tackle rule.
“It was as if all that is good and exciting in rugby league had come together to produce a match for all generations to admire,” wrote John Huxley in the book ‘Wembley Magic’.
For Wigan, it was a record ninth visit to Wembley, while it was Hunslet’s first time at the London stadium in 31 years. Hunslet, from South Leeds, had 12 ‘native Yorkshiremen’ in their side, the only outsider Welshman, John Griffiths.
It took 33 seconds for the first points to be scored. Hunslet halfback, Alan Marchant, a former Halifax star, put the ball directly out of play from the kick-off and Wigan lock, Laurie Gilfedder landed the penalty from the centre spot.
Wigan led 12-9 at halftime with tries to centre, Keith Holden and Rhodesian winger, Trevor Lake, while centre, Geoff Shelton scored a try for Hunslet. Lake, who would go on to have a stint with St George in Sydney, scored his second try in the 59th minute, to put Wigan ahead 20-9. (Wigan’s other winger was Welsh legend, Billy Boston).
Hunslet dug deep to close the margin to six points, with a try to Griffiths in the 65th minute. The Yorkshiremen were getting on top of their Lancashire opposition, and fullback, Billy Langton’s penalty goal in the 76th minute set up a gripping finish, with the crowd of 89,106 breathless with anticipation.
Wigan hung on for the win, but the closeness of the match was illustrated by the fact Ray Ashby (Wigan) and Brian Gabbitas (Hunslet) were joint winners of the Lance Todd Trophy as man of the match.
Wigan player/coach, Eric Ashton received the Challenge Cup from H. R. H., Princess Alexandra. 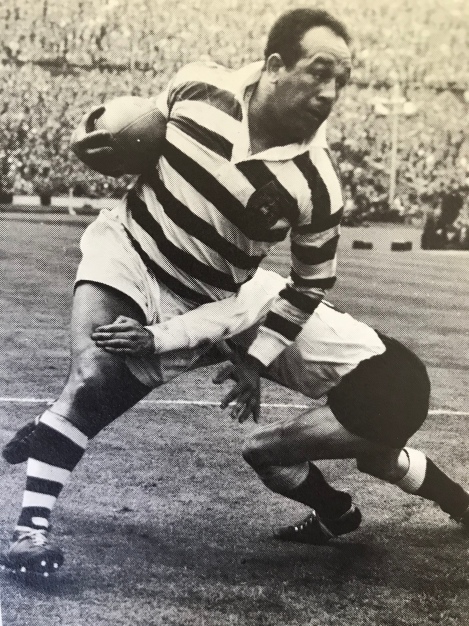 Eric Harris (centre) with Leeds’ teammates, Welshman, Con Murphy (left) and John Kelly before a match in the 1938-39 English season
%d bloggers like this: