By QRL History Committee Chairman, Steve Ricketts, who was a judge for the ARL Team of the Century.

Australian Rugby League ‘Team of the Century’ hooker, Noel Kelly was one of a select group of players to make three Kangaroo tours of Britain and France.
Kelly played 28 Tests for his country, between 1959 and 1967, making his debut in Australia’s 9-8 win over New Zealand at the Sydney Cricket Ground, with fellow Ipswich product, Dud Beattie one of his front rowers.
The following season, Australia fielded an all Ipswich front row, in an 8-8 all draw with France in Sydney, with Kelly and Beattie joined by Gary Parcell, although at this stage Noel had moved north to play at Ayr, in the Burdekin region.
Kelly played seven times for Queensland, first from Ipswich Brothers and then from Ayr, before moving to Sydney to play with the big spending Wests Magpies in 1961. While in Sydney he represented New South Wales five times.
He played in three consecutive grand final losses to St George, describing the 1963 loss as his worst experience in football. Wests had beaten St George three times that season, but lost 8-3 in the game that mattered, with referee, Darcy Lawler’s performance earning the ire of the Magpies’ players and fans.
Equally at home at prop or hooker, Kelly deservedly had a firebrand reputation, and lost count of the number of times he was sent off in his career. He liked to joke that when the postman blew his whistle outside his house, he would immediately jog towards the shower.
His most infamous send-off occurred just 90 seconds into a Test against New Zealand in 1967, when he flattened Kiwi prop, Robert Orchard, after Orchard had knocked out Australian five eighth, Johnny Gleeson. When Orchard came to, he was also marched by referee, Col Pearce.
In his biography, ‘Hard Man’, Kelly recalled that a bunch of his mates had organised tickets for themselves that day.
“But en-route, they stopped off at Eagle Farm races, and they were a minute or two late getting into the ground,” he said. “By the time they settled into their seats, I was in the showers.”
He described those lengthy northern hemisphere tours with the Kangaroos’ as wonderful experiences, but not always a bed of roses.
Working as a butcher at Redbank, when he was first chosen for Queensland in 1958, he was accustomed to good cuts of meat.
“The food was bloody awful,” he commented about life in the north of England in 1959. “Plenty of bread and potatoes, and not much more.”
That first tour went for five months, with Australia losing the Test series against Britain, but winning in France.
In 1963-64, Kelly was part of the first, all-Australian combination to bring the Ashes back from Britain. (The 1911-12 Kangaroos’ included four New Zealanders). Kelly toured again in 1967-68, and although Australia again won the Ashes in Britain, they lost the series in France.
His 28 Test appearances included two against the touring South African team in 1963.
Kelly finished his Sydney playing career as captain-coach of Wests in 1969, and then had one final season as a captain-coach in Wollongong.
He looked back fondly on his career with Wests.
“The Magpies were a huge part of my life, and the spirit and mateship generated at that club, in my nine seasons, are among the best things to ever happen in my life,” he said.
He coached the North Sydney Bears from 1973-76 and took a Sydney representative side on a tour of New Zealand in 1976.
Despite his love for Queensland, he made Sydney his home, living on the northern beaches.
In recent years he was a tireless worker for the Men of League Foundation.
In 2008, he was named hooker in the Australian Rugby League Team of the Century, which was unveiled at a grand ceremony at the Royal Hall of Industries in Sydney. His front rowers were fellow Queenslanders, Duncan Hall and Arthur Beetson.
Noel Kelly passed away on Sunday, June 14, aged 84. He had been ill since suffering a heart attack last month, on the same day his former Western Suburbs’ teammate, Arthur Summons died. 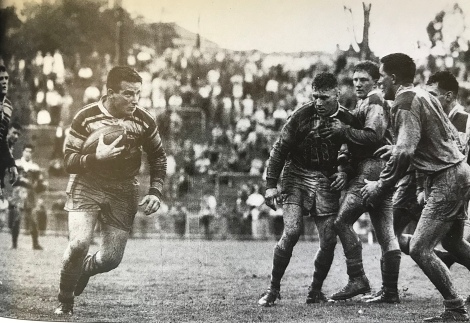