TRAVEL
Some reports predict 30,000 pubs and restaurants in the UK, may not re-open at all, even if things return to ‘normal’.
Before ‘the virus’, many pubs were closing, despite spirited campaigns by locals.
When ‘The Jolly Anglers’ at Ashmansworth shut in 2008, it followed the closure of the local shop and post office in the Hampshire village.
In many respects, one could say the village had lost its heart and soul.
When I organised my four overseas group tours (1990, 1994, 1998 and 2002) I relied a lot on CAMRA’S (Campaign for Real Ale) Good Beer Guides, in terms of organising pub stops, or finding places to eat and drink, in towns and cities in Britain.
Those were the days before Google, and when I sat at the front of our coach, pretending as if I knew what I was talking about, my research was from books like ‘The Guide’, and ‘Waltzing Britannia’, which was a guide to Britain for Australians.
Written by Gillian Martin and Ged Martin, ‘Waltzing Britannia’ provides an historical, at times quirky, look at the UK, through Australian eyes.
When I look at the book now, and see some of the things I underlined, it reminds me just how informative it was, for me and the people who had paid to come on the trips.
For instance, in 1990, when we were walking through St James Park in London, I was able to point out that the lake beside the Mall, was drained in World War I, and the site was offered to the AIF for its headquarters, but rejected. At the far end of the Mall, near Admiralty Arch, there was a bronze statue of Captain James Cook, his foot dangerously placed on a coil of rope. (Last I heard, the statue was still standing!).
In 1994, I took my group to Whitby on the Yorkshire Coast, and was able to point out that the Mulgrave Estates, just to the north, at Sandsend, were the seat of the Normanby family. The Earl of Mulgrave was Governor of Queensland from 1871-74 and the Normanby and Mulgrave Ranges in Queensland are named after him.
In 1998, my group stayed at Hawick in the Scottish Borders. Andrew Tennant was the son of a Hawick shepherd, who emigrated to South Australia in 1839. He acquired land and stock in the colony, bred racehorses and also had interests in New South Wales’ collieries, and in steamship companies. Tennant Creek in the Northern Territory was named after him.
Alec Tennant was a block busting rugby league centre for Manly-Warringah in the 1960s, but I’m not sure whether he is a descendent. Alex played for New South Wales in 1966.
In 2002, my last tour group stayed at Plymouth in Devon. Edmund Lockyer, was born in the village of Wembury, near Plymouth. He became a major in the army, and on January 21, 1827, hoisted the Union Jack at King George Sound on the site Albany in Western Australia, to claim the western third of the continent for Britain.
Last I heard, the ‘Odd Wheel’ pub at Wembury was going to re-open, post-virus restrictions.
The last ‘Good Beer Guide’ I bought, was 2010, and I have taken it with me on four subsequent trips to the UK.
Once or twice I was caught out, because the pub I was seeking had been shut or demolished, and of course, in many cases there were new licensees and/or big changes in the kitchen. But generally speaking, The Guide was a wonderful help, and it was interesting to see how things had changed.
The 1990 guide referred to the White Lion at Wherwell in Hampshire as ‘a pleasant coaching inn’. Marie and I stayed in Wherwell in 2018, and the ‘White Lion’ was still a pleasant inn.
The 2010 Guide describes the Horseshoe Hotel at Egton Bridge in North Yorkshire as a secluded gem in a natural hollow, alongside the River Esk. Nothing had changed when Marie and I, and friends Andrew and Sandy Varley had Sunday roast there in 2018.
Similarly, the ‘Durham Ox’ at Crayke, in the Howardian Hills of North Yorkshire, was still setting high standards in terms of its food, when we had lunch there in 2018, on the basis of what we read in the 2010 Guide.
I have a feeling those good, country pubs will come through this crisis, but it will be a battle for the smaller establishments in the towns and cities.

1 Locals trying to save their pub

2 Steve and Marie Ricketts at Hawick in Scotland 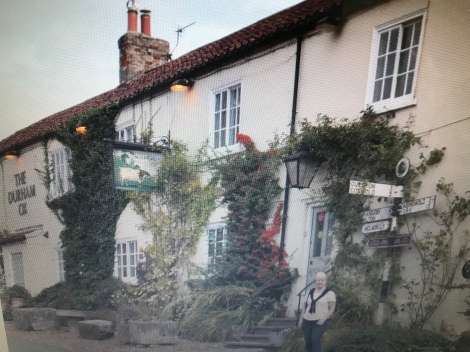 4 Marie Ricketts at the Durham Ox 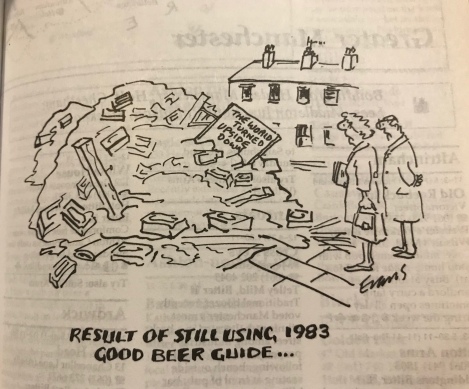 5 The risk you take with an old pub guide.