JUNE 1960
Former French rugby union fullback, Pierre Lacaze came under fire for kicking too much, as France’s rugby league players readied themselves for the First Test against Australia, at the Sydney Cricket Ground.
The criticism was warranted, giving he was trying to land field goals, when tries were there for the taking.
But his accuracy with the boot was never questioned, and he came out in the Test and kicked all four goals in a match which finished 8-8. Welsh born fullback, Keith Barnes from Balmain, kicked all four goals for Australia.
France had won both series against Australia in 1951 and 1955, and were expected to present another quality side in 1960, especially as, in recent years, they had signed quality rugby union internationals – Lacaze, Jean Barthe, Aldo Quaglio and Claude Mantoulan. Barthe and Lacaze were two of the heroes of the French rugby union side’s series win over South Africa in 1958.
In 1960, with Rene Duffort as coach and Jean Duhau as his assistant, France had lost four of their nine matches before the clash with New South Wales at the SCG. The Courier-Mail’s Jack Reardon wrote that the success of the tour hinged on France’s performance against the Blues.
NSW won 25-7, but Reardon said the French had shown considerable improvement, and could not be written off.
French manager, Antoine Blain had this to say. “It took Frenchmen 2,000 years to build Paris. We cannot build a football team in a day.”
Blain said Lacaze and Mantoulan were chosen in the team for the First Test, with instructions to cut down on their kicking. If they did not obey the orders of the coach, they would be dropped.
Despite this warning, Lacaze found himself in hot water at the tourists’ final training run before the Test, when he wandered off alone and practised drop kicking at goal, while the team was lectured on ruck play. Duffort and Duhau gave Lacaze a severe berating and ordered him back with the team.
In the Test, Lacaze kicked the equalizing goal, 30 seconds from full time, after Australian hooker, Noel Kelly had been penalised by referee, Col Pearce. Lacaze missed with two shots at goal, while Barnes missed six. One of Lacaze’s unsuccessful penalty attempts was a drop kick from halfway. He attempted only one field goal.
In his biography, ‘Hard Man’, Noel Kelly said Lacaze wasn’t a fullback who ran with the ball much, so he was hard to get.
“In later years, with his hair thinning, he wore a toupee, which he tucked under his headgear,” Kelly said. “I recall Graeme Langlands laying him low in a game on the 1967 Kangaroo tour – and poor Pierre finished with his hair piece down over his dial. Anyway, on this particular afternoon he finished a French hero – thanks to Col Pearce’s assessment of a single scrum.”
The last 15 minutes of the Test were incredibly tense, and France were in the ascendancy, attacking all over the pitch, but a try would not come.
Australia’s defence was in a state of panic, and cracks were beginning to appear, as many in the crowd of 49,868 cheered the French.
So, it adds up that Kelly would do anything to win that final scrum in front of the posts, and it seems Pearce was justified in awarding a penalty, for a loose arm.
A feature of France’s game was their hard, driving defence, with Barthe to the forefront. He had drawn gasps from the crowd with lifting tackles on giant NSW forward, Norm Provan the week before, and he was at it again, against an Australian pack which featured an all Ipswich front row – Kelly and props, Gary Parcell and Dud Beattie. Parcell and Beattie were still playing in the Ipswich competition, but Kelly had moved to Ayr in North Queensland, in a captain-coach role.
Australia’s only debutant was centre, Ron Boden from Parramatta, while France’s new man was Marseilles prop, Francis Rossi, who was released from military service only six weeks before the touring team was chosen. A reserve for Australia was Queenslander, Col Weir, from Brisbane Wests, who did not get on the field, and was never chosen for Australian again. He is one of at least 22 players, across the decades, who were chosen for Australia, went into camp with the team, featured in the official photograph, but have not been acknowledged in official records, something the Queensland Rugby League History Committee, of which I am chairman, is trying to rectify.
Australia won the return Test 56-6 in Brisbane, but France, despite having barely 13 fit players in their touring party of 26, bounced back to secure a stunning 7-5 win in the Third Test in Sydney. The captain in all three Tests, was centre, Antoine Jiminez, who switched to rugby league from Pau Rugby Union, in 1952, to play with Villeneuve-sur-Lot.
Until recent years that touring side held annual reunions, such was the bond they created, ‘Down Under’. 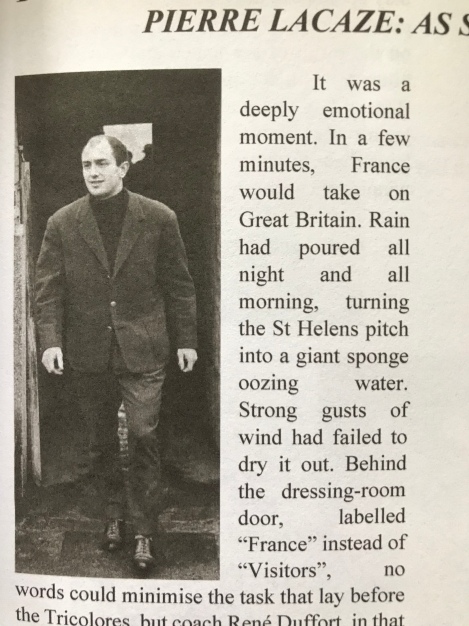 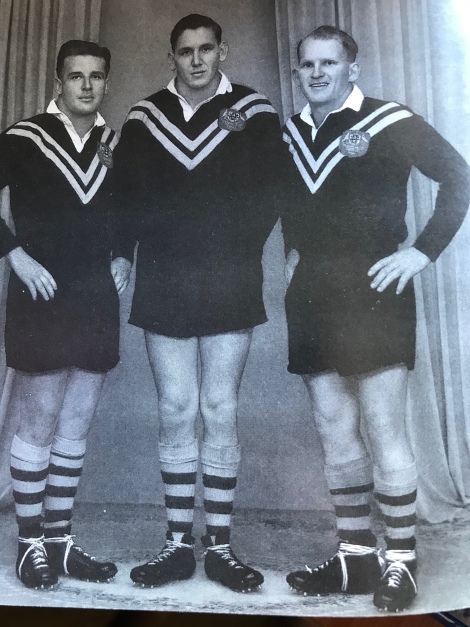