TRAVEL
A 2011 Rugby Union World Cup match between France and Wales was being played, but you wouldn’t have known it, as the people of Villeneuve-sur-Lot went about their daily business.
The only establishment in town showing the October 15 ‘rugger’ from New Zealand, was the pub where the local rugby union players drank.
Villeneuve-sur-Lot is very much a league town, so much so that many league people are quite happy to see France lose in the 15-man code (as they did on this occasion) and there is an intense dislike of the Agen Rugby Union Club, ‘just up the road.’
To understand this ‘logic’, one has to be aware of the suppression suffered by league in France, at the hands of the ‘unionists’.
World War II almost spelled the end of rugby league in France after the (Nazi puppet) Vichy Government banned the sport, allegedly because top league officials were sympathetic to Britain. The main reason was that union politicians were heavily involved with the Vichy Government and they took the opportunity to seize all the League’s assets and banned the game.
Villeneuve-Sur-lot was the first club to switch from union to league in 1934, and it started up again when the League resumed in 1946.
Bordeaux was one of the strong league clubs in the years immediately after World War II, with a crowd of 22,000 turning up for the Test against the 1948 Kiwi side, captained by Patrick Smith from the Canterbury Province.
Bordeaux, on the banks of the River Garonne was the starting point of the European leg of the 2011 European trip undertaken by my wife, Marie and I. (See ‘Sacre Blue in Bordeaux).
After two nights in Bordeaux, we drove east along the Garonne to the port town of Caddilac, where there were lots of tour buses.
Then, in the hilltop town of Duras, I had a run-in with a shop keeper lady, for jumping the queue. I shouldn’t have done it really, but I had the correct change, and there was a long line of people in front of me paying bills, chatting and generally being French. Of course, everything has to be scanned these days. Dropping the change on the counter doesn’t work any more.
While I lacked patience on that occasion, I showed tremendous restraint in the village of Tombeboeuf, where a lady had blocked the street to get an invalid chap into a car. There were other solutions, but…what the hell.
On our arrival at English couple, Terry and Joyce Holmes’ place in Rue du Parasol, Villeneuve-sur-Lot, we were treated to a glass of Ricard each by their elderly neighbour, Madam Cassaud, who had the keys to the house, where we had stayed twice before. Terry and Joyce were to join us later in the month. Madam Cassaud looked in great shape, but her Alsatian dog was showing his age.
We bought sausages, pate and creme brulee at a traditional butcher shop run by the handsome Jayant Eric (At least, Marie said he was handsome). While I was in there, I was engaged in conversation by a customer who recognised me from my previous visits in 2007 and 2009. He had met me at the local league stadium and was thrilled to see me back.
For dinner, Marie and I had fish, bought at the fishmongers in the nearby supermarket, where the range was in keeping with a fishing co-op in Australia, rather than a Woolies or Coles. I had a beer in the nearby Boomerang Bar, while Marie shopped. Yes ‘Boomerang Bar’. I suppose they want people to come back.
The villages of Beauville and Paymoril were our first stops on our first trip of exploration from ‘Vill’. It was beautiful autumn weather – sunny, 23 degrees – and men were playing boules, while two ladies drank wine on the steps of the Lord Mayor’s building in Beauville. The only jarring aspect was the sight of police ‘interrogating’ a gypsy looking lady, on a scooter, in Paymoril.
The next day our drive was far more strenuous, taking us north to the Dordogne, buying lunch (pate) at butcher shop in Villereal, on the way. The butcher wanted to talk rugby – of the 15-man variety.
At the pretty market down of Lalinde, we walked along the Dordogne River and canal, and enjoyed morning tea in the town square.
At a lookout at Tremolate, we chatted to English people from Kent and Essex, and Americans from California, all of whom were living in France.
We enjoyed a picnic lunch at the junction of the Dordogne and Vezere Rivers, before walking into the hills, to the Parc Panoramic. There were great views, but my wife was disappointed by the state of the gardens. They were unkempt, certainly compared with what we had seen in England.
We drove back to ‘Vill’, via Les-Eyzies-de-Tayac, (which is rated the birthplace of pre-historic study); Sarlat la-Caneda; the beautiful hilltop village of Domme, and then Fumel, a place we were familiar with from previous visits.
We dined on pre-prepared ‘Chicken Basque’ for dinner. The Basque region once boasted a rugby league club, but now it is strictly rugby union territory.
Andre Beraud, one of the heroes of France’s inaugural rugby league tour of Australia and New Zealand in 1951, was a Basque, having played rugby union for Biarritz, before switching to league with Marseilles in 1946, after distinguished service in the fight for liberation (from the Nazis), and dare I say it, rugby union authorities. 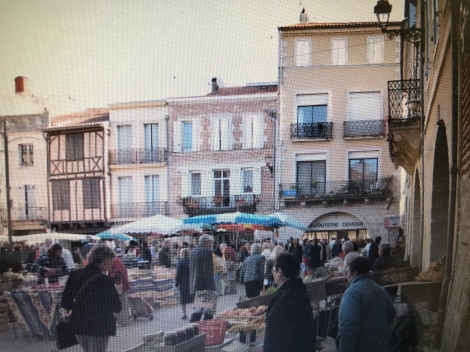