DIARY OF A RETIRED RUGBY LEAGUE WRITER
WEEK 48 2019
MONDAY, DECEMBER 2
The funeral of our former neighbour, Susan Andersen (nee Biggs) at Little Flower Church, Kedron proves a sad, yet inspirational occasion.
Susie was only 36 when she succumbed to breast cancer, leaving a grieving husband, Nathan and a young son. The Biggs were our neighbours at Zillmere for many years, their three daughters, ‘Susie’, Lucy and Jess, being good friends with our kids, Melanie, Damien and Lliam. Our former parish priest at St Flannan’s, Fr Ashley Warbrooke, is the celebrant at the funeral, while St Flannan’s parish stalwart, Claire Rossberg sings beautifully. Marie and I catch up with Susan’s parents, Jeff and Robyn at the wake, in the hall adjoining the church.
Also at the funeral was Mr Gern, from the famous Geebung butchery business, and Kate McLean, who praises our son, Damien’s teaching skills. Kate’s husband is Wallaby great, Paul McLean.
Our attendance at the funeral means I miss a reunion for ‘Old Farts’ from Queensland Newspapers at the Jubilee Hotel, where there is a lot of reminiscing about over-30s v under-30s cricket matches. I played in both age groups.
‘Greedy’ Smith, vocalist and keyboardist with top Australian band, Mental as Anything, has died aged 63. I only saw the Mentals once – at Dairy Farmers Stadium, Townsville, when they were pre-match entertainment for a Cowboys’ clash. I particularly remember ‘Mr Natural’. I also recall driving back from Sydney in 1981 and hearing ‘If you Leave me, can I come too?’ and it remains my favorite Mentals’ song. I heard it as I drove through Woodburn on the Richmond River. It’s funny how you remember those things.
TUESDAY, DECEMBER 3
Morning tea with former Queensland State of Origin forward, Gavin ‘Jed’ Allen at Stafford, after he introduces me to his son, Luke and shows me around his ‘Crystal Print’ plant. There is a huge, Josh Papalli banner on the production line, for the FOGS (Former Origin Greats). Gavin, who underwent heart transplant surgery earlier this year, had his pacemaker out last week.
One of his neighbours at Ashgrove, is Dr Andrew Galbraith, a Queensland pioneer of heart transplant surgery, who was a neighbour of ours at Zillmere in the 1980s, in the house which they sold to Jeff and Robyn Biggs.
WEDNESDAY, DECEMBER 4
Breakfast at ‘Beaches’, Main Beach, where parents allow their little boy to run amok. He bites into a sugar cache and then runs out onto the footpath, but survives. Corn-flake weed has hit the Coast in a big way.
The Queensland Rugby League Staff conference is held at Sea World, and I am one of the speakers. I was recruited by QRL CEO, Rob Moore to reflect on the game’s history, to hopefully give more substance to the brand which they represent. Many of the employees do not have rugby league backgrounds. I think my address went over OK, although at times I felt I was a bit stilted in my delivery. (See ‘Our Game’ on this website, for the full address).
Retiring South East Division manager, Michael Pease wins the inaugural Michael Pease Memorial Award. Central Division’s Rob Crow produces a great ‘CNN piece’ about the year’s activities. North Queensland’s Scott Nosworthy is equally funny, recounting the year. Women get emotional over the fact they are now ‘Maroons’, the same as the men, in the State of Origin arena. Fair enough. The QRL’s financials look strong.
Chat to QRL CEO, Rob Moore; director, Danny McGuire; Gold Coast District Rugby League manager, Brendon Lindsay and Competitions co-ordinator, Dave Maiden.
THURSDAY, DECEMBER 5
Hear a female passer-by says she is 97 percent vegan, but will have a steak at Christmas. That’s the spirit. A neighbour’s vacuum cleaner sounds like a jet aircraft.
Ex-England cricket captain, Bob Willis, has died, aged 70. I loved his laid back, but incisive commentary.
SATURDAY, DECEMBER 7
Our eldest boy, Damien’s Punt Club convenes at the Queens Arms, where Prince Charles had his first drink. It is also the 40th birthday of Damien’s mate, Dr James Brown. There is media speculation Darius Boyd may captain the Broncos from the wing, just as Warren Boland did at Wests in Sydney. Queensland Rugby Union’s Reds have a training run with the Broncos. The Reds are coached by former Bronco, Brad Thorn.
There is talk of a new virus emerging in China. And I don’t mean a computer virus.
Toowong Bowls Club has closed its doors. Club president is my former Courier-Mail work colleague, David Falkenmire. So many bowls clubs around the country are shutting down. I thought this one was safe, because of patronage of students from nearby Queensland University. I have been there once for a social bowls event, with work.
SUNDAY, DECEMBER 8
Drive to St George in South West Queensland with Queensland Rugby League staffers, Arthur Eustace-Earle and Darren Schooth, to meet with QRL Life Member and former Australian team manager, John Barrett, in relation to his historical collection and the best way to look after it. Love the fact people like John, respect the history of the game.
Lunch at Hungry Jack’s, Dalby. Not my choice. Can’t remember the last time I had something from ‘Jack’s’, and the food hasn’t improved. There are a lot of trucks delivering hay to drought hit farmers.
John Barrett meets us in the public bar of the Australian Hotel, where we are staying. We are joined by Keith Codrington, OAM, and local character ‘Coops’, who swears like a trooper and talks like former Canterbury-Bankstown hooker, Billy Johnstone. Coops is a dedicated Canterbury fan. Keith was founding secretary of the St George junior league.
On the topic of rugby league history. Former Queensland Residents’ forward, Bill Johnson from the Darling Downs, has crafted his own wooden trophy, dedicated to the State team’s tours of Papua New Guinea and France in 1989. Bill has donated the trophy to our QRL History Committee, for display at QRL headquarters, Milton. 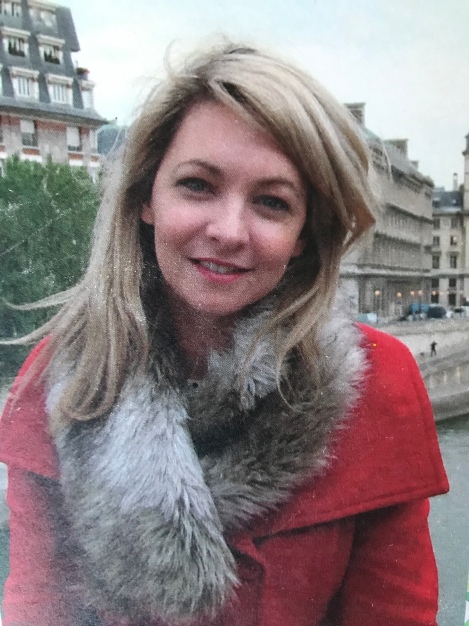 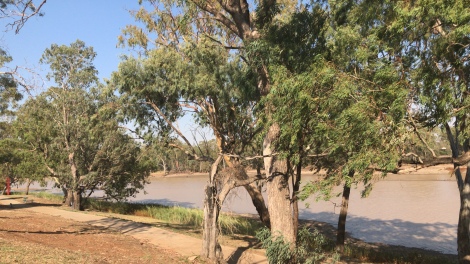 3 The Balonne River at St George 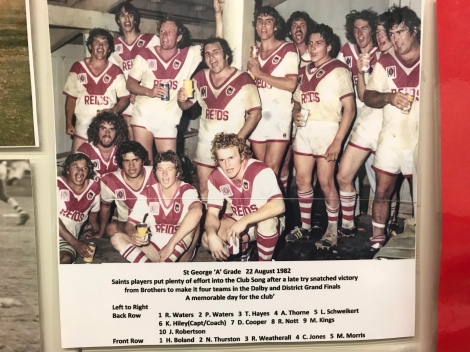 5 A character in the Australian Hotel, St George 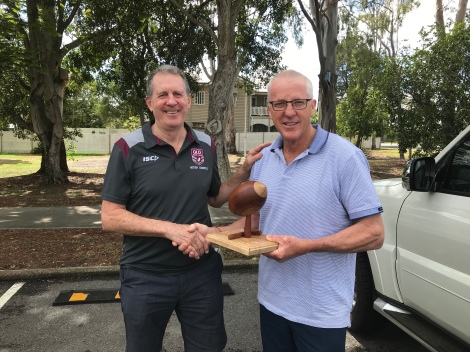