Referee, Fred Lindop dealt out 15 cautions in a brutal World Cup rugby league match at Headingley, Leeds with Great Britain scoring the only try of the contest, in the home team’s 11-4 win over Australia.
Australia’s John O’Neill copped four cautions and was incredibly lucky not to have been sent off, after he decked rival prop, Dennis Hartley just before halftime. Lindop weighed the evidence from a touch judge’s report and decided Hartley had provoked the South Sydney star. Other Australians to be admonished by Lindop were O’Neill’s co-prop, Bob O’Reilly; fullback, Eric Simms and second rower, Paul Sait.
British lock, Mal Reilly copped three cautions for foul play, while Hartley and Welsh hooker, Tony Fisher earned two each and halfback, Keith Hepworth, one.
Australia had been seeking revenge after Britain had won the Ashes Test series ‘down under’, earlier in the year.
The Australian selectors came up with a young, new look pack, with hooker, Elwyn Walters (27) the veteran, at Headingley.
Australian Associated Press described the match as one of the fiercest internationals played by the two countries, with the Australians out to prove a point.
“Nearly every tackle carried with it a punch, an elbow or just a general roughing up for the victim,” reported AAP. “It was not a hunting ground for the meek. But the Australians failed to finish off a number of promising second half breaks that should have steered them to victory”.
Britain’s try was scored by centre, Syd Hynes in the 53rd minute, and stemmed from a dazzling display of passes between forwards Fisher, Reilly, Doug Laughton and Cliff Watson. Hynes also kicked a field goal, while fullback, Ray Dutton landed three goals.
Australia’s points came from an Eric Simms penalty goal and a Bob Fulton field goal.
The result continued a depressing sequence of setbacks for the Kangaroos at Headingley, with Britain having won all nine Tests between the two countries at the ground.
On the same weekend as Australia and Britain clashed, the Kiwis accounted for France 16-15 in Hull, the highlight a 100 metre try by French winger, Serge Marsolan from the Saint-Gaudens club (formerly with Auch rugby union), an effort which earned him a place in the Guinness Book of Records, for the longest try in ‘international rugby’. (You can see it on his website, serge.marsolan.free.fr). Marsolan was judged the best winger in the world, after the tournament.
Australia had beaten New Zealand 47-11 in the opening match of the tournament, at Central Park, Wigan with Catholic priest, John Cootes scoring two tries and Simms landing nine goals from 10 shots.
The Australians stayed at the Midland Hotel in Bradford, abandoning their traditional base at Ilkley, forever. The 1967-68 Kangaroos faced a substantial damage bill after their Ilkley stay, with officials acknowledging the accommodation was sub-standard, and the cause of unrest in the camp.
On this occasion, it was decided to book the team into a classier establishment, in the hope that would bring with it, improved behaviour.
Midland Hotel manager, Mr N D Birrell, revealed he had banned rugby union teams, following wild behaviour, which included the spraying of fire extinguishers, up and down corridors.
The Australian team was given a no holds barred lecture before leaving Sydney, on the standards expected of them, and coach, Harry Bath and managers, Ken Arthurson (NSW) and Bert Quinn (Qld) vowed to stand by their word. South Sydney lock, Ron Coote captained the side, with original choice, Graeme Langlands ruled out of the tour with a broken hand.
Footnote: The World Cup, which was donated by French president, Paul Barriere ahead of the first tournament in France in 1954, was stolen from the Midland Hotel on November 1, 1970. It was found in a rubbish tip 20 years later, and returned to the Rugby Football League.
Australia beat Britain 12-7 in the 1970 final, despite losing to France the week before (see Flashback November 1970, this website). 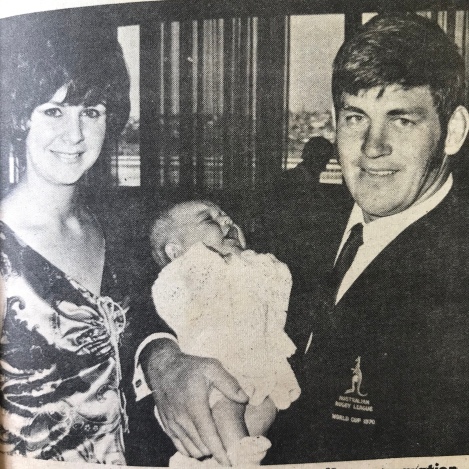 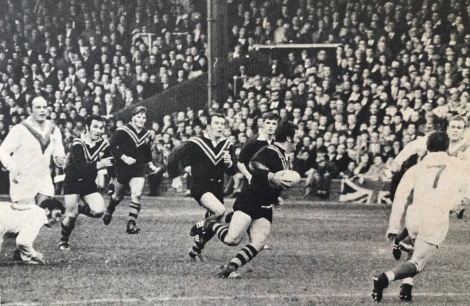 4 Ray Branighan scores against the Kiwis at Wigan.